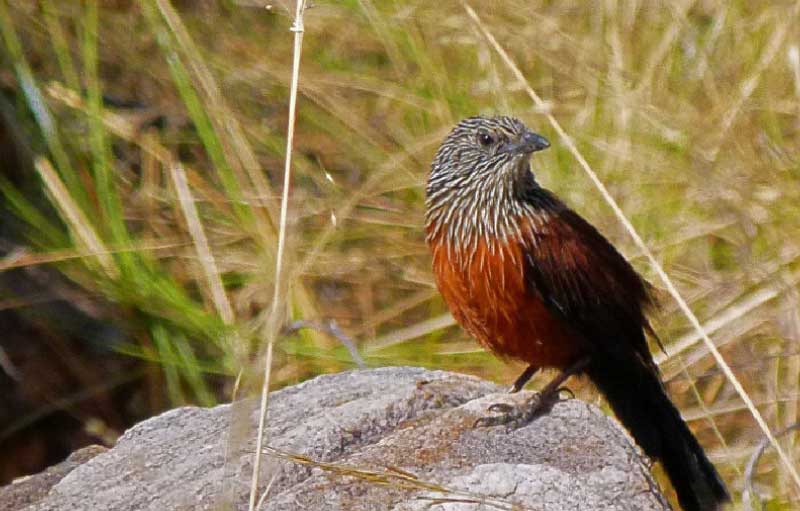 The June 2011 Southern Birding Services 6-day Five Grasswren tour consisted of 7 participants in two vehicles. Guided by Peter Waanders and co-led by Tonia Cochran the itinerary took us up the famous Birdsville track where conditions were excellent following high rainfall in preceding seasons. A total of 176 species were seen, including good views of all 5 grasswrens.

While partygoers in the city started heading home, a group of dedicated birders climbed into two four-wheel drive vehicles and headed north. Foggy and frosty winter conditions didn’t deter a small flock of Slender-billed Thornbills from putting on a show on the samphire coast north of Adelaide. After some solid driving we arrived in the beautiful Flinders Ranges after lunch to search for Short-tailed Grasswren. Despite windy conditions we located 2 individuals that eventually provided great views and photographic opportunities. Shortly afterwards while driving on a rather rocky road through creekbeds we had our first (and thankfully, last!) flat tyre. The endangered Yellow-footed Rock-wallaby showed up on cue and just before dark a pair of Grey-fronted Honeyeaters put in a brilliant performance. We continued on to Lyndhurst for the night.

This morning we searched for Chestnut-breasted Whiteface and found two of these highly sought-after birds after a bit over an hour. They were singing and generally showing perfectly in the calm, sunny weather. At the next stop in the stony desert interspersed with low hills and vegetated creek beds we found Rufous Fieldwren singing from a bush and a pair of Thick-billed Grasswrens posing perfectly on a saltbush. A family group of Cinnamon Quail-thrush was observed for some time while other good birds such as Zebra Finches, White-winged Fairy-wrens and Black-faced Woodswallows were omnipresent.

After lunch at Marree we set off onto the Birdsville track. At the (now flooded) Lake Gregory a pair of Black-breasted Buzzards flew slowly over, being mobbed by a Wedge-tailed Eagle. On the stony gibber plain a pair of Black Falcon was observed, one of which swooped down to catch a mouse off the road. On the same plains a pair of Gibberbird also showed brilliantly. Last year the Coopers Creek had flooded for the first time in 20 years and is now only crossable by means of a ferry which had been out of action for the same amount of time. It got us across safely and we arrived at Mungerannie after flushing plenty of Orange Chats, some more Cinnamon Quail-thrushes and observing a pair of Dingos.

We set off very early for a big day birding along the Birdsville. Just after sunrise we arrived at our first stop, a flooded swamp, where it took us some time to locate the main target: Grey Grasswren. Because the lignum bushes are mostly under water, the grasswrens were seen flying across water from one bush to another, sometimes perched, sometimes foraging on muddy edges. We counted at least 8 individuals, possibly more. In the background was the constant chatter of ibis and spoonbill rookeries while one Spotless Crake and countless Black-tailed Native-hens foraged around in the mud; more Budgies flew over and large numbers of Black Kite started hovering as the weather warmed up. The native Long-haired Rat was seen everywhere; their numbers have increased as a result of good vegetation growth and they are reported to be the staple food of Letter-winged Kite. Unfortunately these beautiful birds weren’t home, despite fresh excrement marks near the nest and plenty of pellets and remains of Long-haired Rats.

On the way back to Mungerannie we checked a sand dune and found a nice pair of Black Honeyeater as well as some Crimson Chats. On the way back in the dark we saw three Brolgas, a Barn Owl and a Spotted Nightjar.

Was to be the last morning in the desert and checking another sand dune we found a pair of Banded Whiteface flying around and at times perched atop a bush. A bit later a search of the canegrass clumps yielded two Eyrean Grasswren, one of which showed very sitting on a saltbush. We then headed south, and flushed a group of at least 150 Flock Bronzewings on the road, that landed nearby allowing good vies. After crossing the ferry again (where there were four Brolgas, good numbers of Gull-billed Terns and more chats, Zebra Finches and Budgies) we birded our way back to Lyndhurst which yielded a Pied Honeyeater (could not be re-located), an Australian Spotted Crake and a Buff-banded Rail.

The start of a long drive south. At our first stop on an afforested hilltop near Hawker we’d hit the jackpot. A Black-eared Cuckoo was heard singing and subsequently two birds were seen foraging; followed by a Horsfield’s Bronze-cuckoo, a small flock of Inland Thornbill and a pair of obliging Redthroat. A Hobby flew by and nearby, good views were had of a pair of Chirruping Wedgebill. Next, we paid a visit to the Arid Lands Botanical Gardens and despite the windy conditions located a White-fronted Honeyeater. A nearby coastal saltpan held small numbers of Banded Stilt amongst Red-necked Avocet and Black-winged Stilt. We then drove straight to Waikerie for the night.

Rain was forecast as we drove to Birdlife Australia’s Gluepot Reserve. The weather was balmy, windy and overcast, not exactly ideal for birding. Much time was spent tracking down Red-lored Whistler but unfortunately the only bird that was singing disappeared without being seen. To make up for that we had unbelievably good views of the fifth and last grasswren for the trip: Striated Grasswren. A pair was singing and running in circles around the observers, approaching to within 4 metres at times. At the same site we had equally good views of a Southern Scrubrobin singing and subsequently coming close to the observers. Moving on as the weather deteriorated we quickly located Chestnut Quail-thrush and Gilbert’s Whistler. Other good species seen here include Mulga Parrot, Brown-headed Honeyeater and Hooded Robin. A flock of Miners kept us busy trying to identify the various individuals, which turned out to be mostly Black-eared Miners allowing good views and photo opportunities. A pair of White-browed Treecreepers showed well in the Casuarina woodland and while it started raining we searched the old airstrip, overgrown with flowering Eremophila bushes, where White-fronted Honeyeater and Splendid Fairy-wren formed a good conclusion to the day. After leaving Gluepot we drove back to Adelaide in the pouring rain and dropped satisfied participants (some of which were return-clients) back at their hotel, agreeing it had been another highly successful tour.