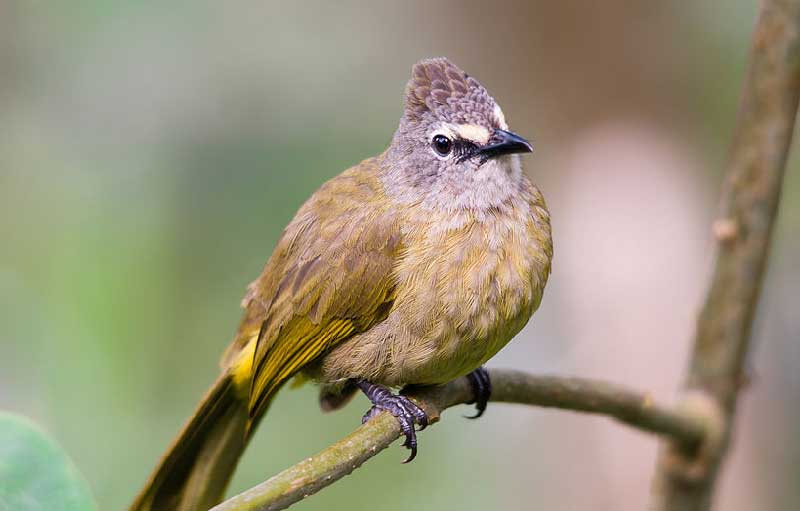 This report covers a week’s birding trip to north-western Thailand undertaken by Peter Waanders, Bruce Wedderburn and Stijn de Win.  The trip, during early March 2008, was timed to maximize the species list, by capturing both the migratory season and the start of the breeding season for resident species. The weather during the trip was dry and warm (with one early morning shower) – although higher up in the mountains it was of course cooler, with the summit of Doi Inthanon being remarkably cold. We had hired a Toyota Hilux 4WD and Stijn de Win, who had done a lot of birding in Thailand in recent years, had organised the itinerary and was to be our guide. Species names in this report follow Clements but in some cases I have given alternative names in brackets. I recorded a total of 256 species, a whopping 136 of which were lifers for me. An additional 25 species were heard only, of which 9 would have been lifers for me.

Notes on the visited areas

Chiang Mai, with an altitude of approximately 310 meters above sea level, is situated approximately 700 kilometres from Bangkok on the Mae Ping River basin. Surrounded by high mountain ranges, the city covers an area of approximately 20,107 square kilometres and is the country’s second largest province. Chiang Mai borders Myanmar on the north, Lamphun and Tak Provinces on the south, Chiang Rai, Lampang and Lamphun Provinces on the east and Mae Hong Son Province on the west. The terrain is mainly comprised of jungles and mountains, which are home to the hill tribes. In addition, wildlife and exotic flora may be found in the national parks.

Tha Thon is on a river near a lowland area and can produce some rare and uncommon birds and is also a convenient access point to Doi Lang.

Doi Luang National park is one of the largest parks in the north. The park covers 1170 square kilometers and is dominated by two north-south mountain ranges, elevations range from 600 m to 1798 m at the peak of Doi Lang. During March – May temperatures range between 27 to 32oC.The fertile forests are made up of hill evergreen forest, moist evergreen forest, mixed deciduous forest and dry dipterocarp forest.

Doi Ang Kang is an area on the border with Myanmar consisting of a number of peaks and ridges that, although largely deforested, contain a lot of scrubby vegetation and forest patches which provide enough habitat to house a good number of bird species, many of which are found in few other parts of the country. The scenery is quite beautiful and a number of small hill tribe villages are dotted around the region as are a few Thai military outposts which occasionally get involved in cross-border disagreements that give the region an atmosphere of adventure. Doi Ang Kang is an easier version of Doi Chiang Dao, it is easily accessed unlike the hair raising ride needed to get to the best birdwatching on the former mountain but it does lack a certain something and the main ingredient lacking is forest. Nevertheless, it does have the open montane scrubland that attracts certain north Asian birds such as the White-browed Laughingthrush Garrulax sannio and the Brown-breasted Bulbul Pycnonotus Xanthorrhous.

Doi Chiang Dao is a limestone mountain in the Chiang Dao Wildlife Reserve area. This coneshaped mountain is 2,195 metres from sea level, which makes it the third highest mountain in Thailand. Doi Chiang Dao is situated approximately 60km due north of Chiang Mai and it is noted for being the southernmost range of many north Asian birds. The variety of forest types and altitude of the mountain combined with its close proximity to Myanmar result in a large number of exciting birds found here as well as some excellent views and a relaxing atmosphere. The main targets here are Hume`s Pheasant Syrmaticus humiae and Giant Nuthatch Sitta magna.

Doi Inthanon lies 60km south-west of Chiang Mai and at 2,565 metres is the highest mountain in Thailand. Because of its height it has certain montane species that can be found nowhere else in Thailand, among these are the Ashy-throated Warbler Phylloscopus maculipennis and the Greentailed Sunbird Aethopyga nipalensis-angkanensis. The latter is endemic to the summit area. Doi Inthanon National Park consists of high mountains, including Doi Inthanon, which is the source of many rivers. The National Park has beautiful natural scenery such as waterfalls, particularly Mae Ya Waterfall, which is one of the most beautiful waterfalls in Thailand. In summer, despite hot weather in central Chiang Mai and nearby districts, it is still freezing on the top of Doi Inthanon. The forest in the park is one of the country’s very significance and valuable heritage. Forests include Moist Evergreen Forest, Pine forest and Mixed Deciduous Forest, worth in economic like teak and mountain pine. In addition to these, there are many beautiful flowers including vanda orchid, phycastylis and rhododendron. Sphagnum Moss and osmanda fern are found at higher levels in the park. Because of its broad altitudinal range and the cool climate of its upper reaches, the park supports the largest number of bird species of any site in Thailand. The Centre for Wildlife Research at Mahidol University records a present total of 362 species and expects the addition of more as many birds at the summit are migrants from northern Asia. Species restricted to Doi Inthanon are Ashy-throated Warbler and an endemic race of the Green-tailed Sunbird; the park is the only site where the Chestnut-bellied Rock-Thrush and the Yellow-bellied Flower pecker are known to over summer and probably breed.

Mae Hia is a lowland area close to Chiang Mai consisting of scrub, grassland and dipterocarp. It hosts a whole range of lowland birds and it is not unusual to list 40-50 species of birds in a couple of hours. Blue Magpies Urocissa erythrorhyncha, Green Bee-Eaters Merops orientalis, the Redwattled Lapwing Vanellus indicus and the Hoopoe Upupa epops are almost certain to be seen.

Late afternoon arrival at Chiang Mai airport (from the carpark I saw my first lifer: 2 Ashy Woodswallows), then a few hours’ drive to Thaton, where at night we heard a Collared Scops-Owl.

An early start for what was going to be a full day birding up Doi Lang. There was a little out-ofseason rain and still in the dark we heard 3 Asian Barred Owlets. We stopped for a while at a bridge in the rainforest, which was very productive, then proceeded further up the mountain, birding at various spots along the way. It was mainly dense forest but near the top of the mountain the landscape was more open with grassy/scrubby vegetation and we could look out over nearby ranges towards Burma. We spent the night again in Thaton. Highlights of the day include: 95 bird species seen! Crested Finchbill, Blue-bearded Bee-eater, Chestnut-bellied Rock-Thrush, Crested Goshawk, Slaty-backed and Little Pied Flycatcher, Spectacled Barwing, Bay Woodpecker, Red-faced Liocicla, Black-eared Shrike Babbler…

We got up early again and drove for a while to the next mountain, for a full day birding up Doi Pha Hom Pok. The slopes were covered in good, deciduous forests, higher up mixed with pine trees an near the top was more open, grassy/scrubby vegetation. We spent the night in a hotel in Fang. Highlights of the day include: Russet Bush Warbler, Banded Bay Cuckoo, Mountain Hawk Eagle, Burmese Shrike, Asian Paradise Flycatcher, Rusty-cheeked Scimitar Babbler, White-browed Laughingthrush, Mountain Bamboo Partridge, Brown-breasted Bulbul…

In the morning we drove to the beautiful Royal Gardens at Doi Ang Khan. It was foggy and chilly here but as we birded the sun came out. After bagging a beautiful male Black-breasted Thrush and a mid-morning breakfast of rice and fried egg, we moved on to Chiang Dao and birded the temple area down the mountain and later the rice paddies near town. We stayed in a ‘resort’ consisting of individual cottages in a beautiful garden setting at the foot of the mountain. Highlights of the day include: 107 bird species seen! Black-breasted Thrush, Abberant Bush Warbler, Spot-breasted Parrotbill, White-browed Laughingthrush, Streaked Wren Babbler, Pied Harrier…

Another day, another mountain. Early in the morning we drove up the extremely bumpy track to Doi Chiang Dao, a site famous for Giant Nuthatch. It didn’t take long to find a pair in the pine trees partway up the mountain. We continued towards the summit, birding along the way (which produced a beautiful male Hume’s Pheasant), then spent considerable time checking out various tracks near the ranger station. At the end of the day we drove to Chiang Mai and just before dark checked the Royal Project where we saw several Green Peafowl preparing to roost for the night. The night was spent in Chiang Mai. Highlights of the day include: Green Peafowl, Hume’s Pheasant, Chestnut Bunting, Giant Nuthatch, Collared Owlet, Wedge-tailed Green Pigeon, Long-tailed Broadbill, Burmese Shrike, Chestnut-bellied Rock-Thrush, Crested Finchbill, Slaty-backed Forktail, Spot-breasted Babbler, Slender-billed Oriole…

We started birding the Huay Tung Tao lowlands near Chiang Mai and as it became hot later in the morning we continued to the last mountain for the trip: Doi Inthanon. We had lunch at Mr Daeng’s ‘Bird Centre’ while a Dark-sided Thrush was foraging in the muddy stream below the verandah, and later a White-browed Shortwing at the exact same site! Here we birded the rest of the day around the two waterfalls, an orchard (Fire-capped Tit), the km 34 jeep track and the campground. We found a place to stay near the entrance / ranger’s station. Highlights of the day include: Barred Buttonquail, Painted Snipe, Red-billed Blue Magpie, Rufous Treepie, Purple Sunbird, Indochinese Bushlark, Barred Buttonquail, Rufous-winged Buzzard, Dark-sided Thrush, Wire-tailed Swallow, Fire-capped Tit, Daurian Redstart, Chinese Leaf Warbler, White-browed Shortwing…

We spent the entire day on Doi Inthanon. We started at the summit (upon approaching the summit a Grey Nightjar flew up from a roadside marker) where it was decidedly cold. At the summit was a small, partly overgrown marsh surrounded by red and white flowering rhododendrons. Other sites we birded were the km 37 jungle jeep track, Khun Wang road, and the km 23 and km 13 jeep tracks, the latter of which was dry dipterocarp forest and we stayed here until dark for owling. Highlights of the day include: Black-headed Woodpecker, Large Hawk Cuckoo, Grey Nightjar, Rosy Minivet, Collared Falconet, Green-tailed Sunbird, Pygmy Wren Babbler, Snowy-browed Flycatcher, Red-flanked Bluetail, Blue-throated Flycatcher…

Last day. We spent the morning at Doi Inthanon again (including the summit, where it was cold and foggy, and jeep tracks at km 37, km 34 and km 23). Later in the day we returned to Chiang Mai and where we birded the fields around the Mai Hia Agricultural College before return to the airport. Highlights of the day include: Ashy Woodpigeon, Long-tailed Broadbill, Grey-sided Thrush, Slatybellied Tesia, Brown-throated Treecreeper, Rufous-fronted Shrike Babbler, Rufous-winged Buzzard, Chinese Francolin, Green-billed Malkoha…