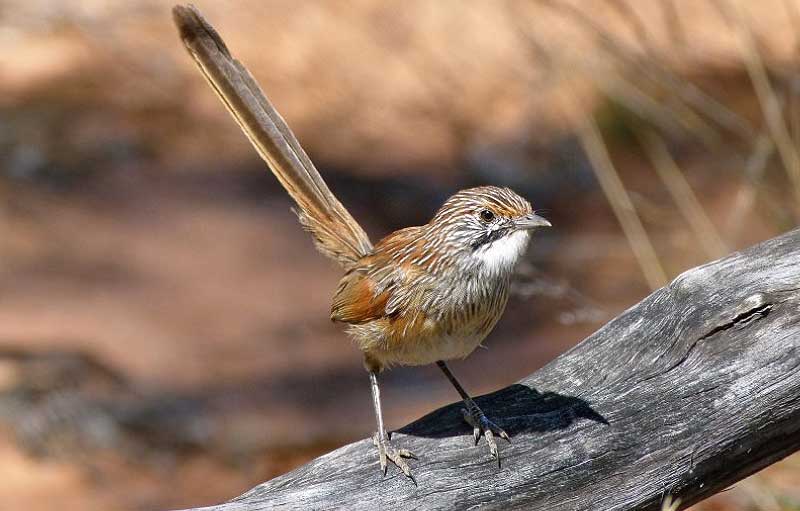 This was the inagural ‘Five Grasswren’ birding tour run by Southern Birding Services. The aim was to find half of all of Australia’s current Grasswren species in South Australia’s mallee and the remote Corner Country: Striated Grasswren, Short-tailed Grasswren, Thick-billed Grasswren, Eyrean Grasswren and Grey Grasswren. All of these were found, as were a good number of other rare, specialised or endangered outback species.

The tour departed from Waikerie with a day trip to Birds Australia’s Gluepot Reserve. It was a very cool morning and upon our arrival in the reserve, just after sunrise, the car thermometer showed 0oC. We spent quite some time searching for Red-lored Whistler, which was singing at its usual location, but had to be satisfied with a glimpse of the male. We were more fortunate with our main target, Striated Grasswren, of which we saw, over the course of the day, no less than 10 individuals. It seemed as if each suitable patch of Spinifex held some birds. One even crossed the track right in front of the vehicle! Other good species seen here included Regent Parrot, Chestnut Quail-thrush, Hooded Robin, Southern Scrubrobin, Crested Bellbird, Gilbert’s Whistler, Shy Heathwren and a group of hybrid Yellow-throated x Black-eared Miner containing two purebred Black-eared Miners. After having spent some time observing the miners, we returned to Waikerie, along the way picking up species such as Mallee Ringneck, Mulga Parrot, White-browed Treecreeper, Chestnut-rumped Thornbill, Splendid and Variegated Fairy-wren, Grey Butcherbird, Grey Currawong, Chestnut-crowned and White-browed Babblers, Horsfield’s Bronze-Cuckoo, Southern whiteface and Apostlebird. We did some birding around a local wetland, picking up many water birds including Chestnut Teal, Pink-eared Duck and Yellow-billed Spoonbill. Subsequently we went to a private sanctuary near Waikerie where we saw Malleefowl, Barn Owl, Varied Sitella, Rainbow Bee-eater and Inland Thornbill.

We again departed early from Waikerie (where a Gilbert’s Whistler was singing before sunrise) and after an eventless 4-hour drive arrived at the Flinders Ranges. As it was only mid-morning we headed straight to the Short-tailed Grasswren site where we located a Short-tailed Grasswren within less than five minutes! It even posed on a small rock for a minute or two. A little while later another two Short-tailed Grasswrens were found a bit further down the hill. Good views of a few foraging Elegant Parrot were obtained at this site, too. As we had saved some time by quickly finding the Grasswrens we decided a coffee break at Wilpena was warranted before the scenic drive through the Flinders Ranges. Several Emus were present along the road and a small group of Yellow-footed Rock Wallabies was found clambering on a rockfall. There were plenty of other macropods around, in particular, Western Grey, Red and Euro Kangaroo. We proceeded towards Lyndhurst, where we arrived in the outback hotel just in time for those interested to watch the 2006 Australian Football Grand Final.

Another early morning departure as we headed for the famous Chestnut-breasted Whiteface site a few kilometres up the Strzelecki Track. Shortly after arrival at the site we located a fine pair of Thick-billed Grasswren, our third Grasswren species. We continued birding here and found several White-winged Fairy-wrens and Australian Pipits, and not much later a flock of six Chestnut-breasted White-faces. They showed extremely well, as did a White-winged Triller nearby. A check of the area on the other side of the road delivered Cinnamon Quail-thrush, three more Chestnut-breasted Whitefaces and even some more Thick-billed Grasswrens. In the same area we also recorded Rufous Fieldwren and Chirruping Wedgebill. Only 45 minutes had passed since we first arrived at this site! We returned to Lyndhurst to stock up on fuel and have a coffee break after which we returned to the Strzelecki Track. A 500 km drive on unsealed roads was awaiting us. At one of the the first (dry) creek crossings we stopped to observe a nice male Pied Honeyeater. Once we had crossed the dingo fence the landscape turned into an open and stony (gibber) desert, ideal habitat for Gibber Chat. Every once in a while a suitable-looking bird would fly off the road but these always turned out to be Australian Pipits. Finally, however, we hit the jackpot with no less than four Gibberbirds flying off and landing not far ahead. We observed them for a while feeding on the ground.

A few hours later we stopped at the picturesque Montecollina Bore, where hundreds of noisy Little Corellas where flying around and good numbers of Zebra Finches came in to drink. White-backed Swallows were foraging over the water. Our main target here was however Eyrean Grasswren. With the temperature hovering around 35° C, and the heat bouncing off the white sand dunes that made up this part of the desert, the search was not going to be pleasant. A bit over half an hour was long enough in these conditions and we decided to return to the vehicle for lunch, after which we searched a different area of sand dunes, and soon enough found a stunning Eyrean Grasswren! The bird allowed itself to be observed for nearly five minutes. Soon after returning to the main road we saw another Eyrean Grasswren running along it. We left the Strzelecki track to turn east at Merty Merty, where the desert consists of long, east-west running red sand dunes with light vegetation. On one such dunes a third Eyrean Grasswren crossed the road right in front of the vehicle! The drought had hit hard with many areas devoid of any vegetation. Two Banded Lapwings were braving these conditions, seeking shelter in the shade of a traffic sign. As we arrived rather early at Cameron’s Corner, where the three states (SA, NSW and Qld) meet, we decided to push on, rather than spending the night here as originally planned, and head for Tibooburra. On the way to Tibooburra we found four Australian Pratincoles. Just before sunset we found a flock of 22 stunning Inland Dotterels, and saw small numbers of Bourke’s Parrots flying past. We arrived in Tibooburra after dark, where we soon found accommodation.

We left well before sunrise for the drive to the Grey Grasswren site, along the Queensland – NSW border. While driving we came across a small flock of Orange Chats: beautiful birds to see and the first for this trip! We also found several more Bourke’s Parrots and Red-backed Kingfishers. Once we entered the rather dry-looking lignum swamp, home to the Grey Grasswren, we mentally prepared ourselves for a long and hot search. However within minutes we located two stunning Grey Grasswrens, which allowed awesome views. Having seen the fifth Grasswren species our quest was successful and we returned to Tibooburra for a late breakfast. Afterwards we checked out a nearby waterhole where another Red-backed Kingfisher, some more Orange Chats and some brilliant Crimson Chats were found. On the drive south we came across another Gibberbird and a few Australian Pratincoles. After a lunch stop at Broken Hill we arrived back in Waikerie just after sunset.