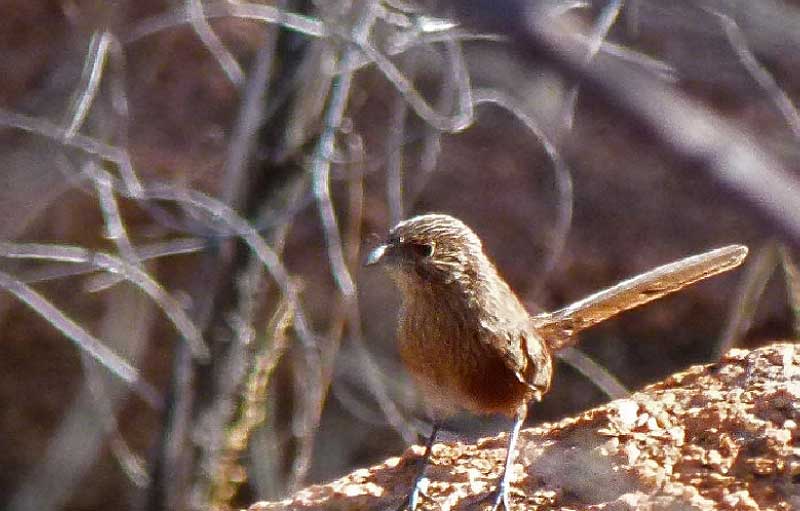 This was the second ‘Five Grasswren’ birding tour run by Southern Birding Services, with slight modifications to the itinerary – the main one being the addition of an extra day to reduce the amount of daily driving. The aim was to find half of all of Australia’s current Grasswren species in South Australia’s mallee and the remote Corner Country: Striated Grasswren, Short-tailed Grasswren, Thick-billed Grasswren, Eyrean Grasswren and Grey Grasswren. Unusually high rainfall over the past few weeks, and indeed during the day before the tour, had left the outback landscape in excellent condition, with green vegetation and water all around. All target species were found, as were a good number of other rare, specialised or endangered outback species.

We left Adelaide under overcast skies and as we headed north, ended up in the remnants of a tropical depression which had dumped between 50 and 100 mm rain in the area we were going to visit. Fortunately the skies cleared up once we arrived in the Flinders Ranges, just
after lunch. Within 10 minutes of our arrival at the Short-tailed Grasswren site we located a family of Short-tailed Grasswrens, which we observed at length, running between spinifex clumps and foraging. Pishing and squeeking attracted the attention of one bird which came within five meters of the observers! Good views of a few foraging Elegant Parrots were obtained at this site, too. We proceeded along the track through the Brachina Gorge, where amongst breathtaking scenery consisting of steep cliffs and narrow gorges in various hues of red we saw a Peregrine Falcon perform in the air currents and observed three Grey-fronted Honeyeaters at close range. A little further, at a rockfall, a few endangered Yellow-footed Rock-wallabies were present. Following the geological trail, where various layers ranging in age between 500 and 800 million years show, we ended up leaving the Flinders Ranges for the stony outback plains which closer to Lyndhurst gave way to the Strzelecki desert. At Lyndhurst we found the Strzelecki track closed, as numerous creek crossings had been washed out by the rain. We used our time wisely by birding the nearby disused airstrip and surrounding areas which resulted in good views of Cinnamon Quail-thrush and a glimpse of Thick-billed Grasswren. We waited here until a little before sunset when two Inland Dotterels appeared.

An early morning departure as we commenced our journey on the Strzelekci track. First stop was at the Chestnut-breasted Whiteface site, where it didn’t take us long to find four Chestnut-breasted Whitefaces. We had short views of them foraging, before they flew off, leaving the observers wanting more. Nearby two Cinnamon Quail-thrushes were foraging. As we searched the low hills for more Chestnut-breasted Whitefaces, we came across Thick-billed Grasswrens in many places, but never did they sit still for long enough to obtain satisfactory views. After an hour or so we found a single Chestnut-breasted Whiteface, which allowed itself to be observed quite well in the scope. Checking out a flat plain with low vegetation on our return to the car a pair of Thickbilled Grasswren and a pair of Rufous Fieldwren were showing brilliantly in the same general area, much to the delight of the observers. Other species we found here included Chirruping Wedgebill, White-winged Fairy-wren and Australian Pipit. We proceeded up the Strzelecki Track, with our next destination Montecollina Bore. Along the way we crossed many creeks with various depths of water in them. Bird species found included Wedge-tailed Eagle, Budgerigar, Pied Honeyeater, Orange Chat, Crested Bellbird, Black-faced Woodswallow and Zebra Finch. Mid-afternoon, at Montecollina Bore, White-backed Swallows were flying around as were Black Kites. We searched the surrounding white sand dunes for Eyrean Grasswren, but with no success. Had we spent longer here, we most likely would have found the species, but time was running out as we still had to travel about 300 km over dirt roads of unknown condition after so much rain, to reach Cameron Corner tonight.

We left the Strzelecki track to turn east at Merty Merty, where the desert consists of long, east-west running red sand dunes with light vegetation. Unlike our 2006 trip, where the landscape had been terribly degraded, this time there was green everywhere and the swales between the dunes were under water. We also had to navigate quite a few treacherous sections of road under water for 100 meters or more of unknown depth. This slowed progress down significantly and reduced time for birding. Darkness fell as we were still 50 km away from Cameron Corner. Driving past numerous temporary lakes and through sections of inundated road, we flushed Black-tailed Native Hens
everywhere in the headlights of the vehicle. Eventually we arrived at Cameron Corner at 8:30pm. We were half expecting to find the kitchen closed but once we walked into the store, the managers were friendly enough to serve us a well-deserved hamburger each and we realised the time was ‘only’ 8pm as we were in Queensland here – albeit it by only less than 100 meters.

We left early to return the red sand dunes of Merty Merty around sunrise for Eyrean Grasswren and had no trouble locating a pair not far from the road. We observed them for quite some time as they went about their business, foraging in the vegetation atop the dunes, running across the red sand, and singing from the top of canegrass clumps. Walking back we found another pair within meters of the car! We then checked out a large lake with swampy edges where a colony of Gull-billed Tern had taken up residence. Also present on the water were good numbers of Pinkeared Duck. Blue Bonnet was prolific here as was Zebra Finch. We then returned to Cameron Corner for a well-earned coffee, while a Red-backed Kingfisher sat on a roadsign indicating the distance to our next destination, Tibooburra: 150 km. We entered New South Wales and checked out a few sites within Sturt National Park. This area was quite a bit more vegetated but again many
sections of road were under water requiring careful crossing or detours. Cloud had built up again and around lunchtime it started to rain. This of course did not deter us from jumping out of the car at the sight of four Ground Cuckoo-shrikes flying over, which were re-located after a short search. A bit further along a vast lake stretched out where the road once was. Along the shores Orange and Crimson Chats were foraging and fortunately we found a way around the water. The rain petered out, allowing us to have lunch in the National Park, before crossing yet more open gibber plains on the way to Tibooburra. It was still drizzling on and off and a stop at the roadhouse to check out the conditions of the tracks in the area was not promising. It was doubtful whether we would make it to
the Grey Grasswren site, along the Queensland – NSW border. As it was only mid-afternoon we decided to give it a try, as further rain overnight could make the tracks completely impassable. Once we entered the general area where the Grey Grasswren occurs, we parked and set off on a walk over a rather desolate plain, in windy rainy conditions. The prospects were grim as we entered the sodden lignum swamp, home to the Grey Grasswren. After about twenty minutes a pair of Grey Grasswren was found and observed by some participants. By the time the stragglers arrived the birds had moved on, allowing them only distant binocular views. The weather was closing in and with sunset approaching we decided to come back the next day, and we returned to the vehicle (another half hour walk). A reward was present there in the form of a beautiful Black Falcon, seen well at close range by all participants. We returned to Tibooburra in our muddy boots just in time for a well earned dinner.

Another early departure to return to the site of the Grey Grasswren. Fortunately the rain had held off overnight and after the same ritual (park, half hour walk, search) the grasswrens were located after about an hour. This time everyone had excellent views as the birds sat partway up a lignum bush, with the male singing profusely. We returned to Tibooburra for a late breakfast, packed up our gear and started the drive south. The fairly uneventful 600 km drive to Wentworth was interspersed with sightings of Orange Chat, Crimson Chat, Blue Bonnet, Cinnamon Quail-thrush, Chirruping Wedgebill and no less than 14 Major Mitchell Cockatoos eating pademelon seeds on the side of the road. After a short tour of the mining town of Broken Hill we arrived in Wentworth, on the Darling river, just before sunset, allowing the addition of Yellow Rosella and a few water birds to the daylist.

Another early departure for a drive to the Bookmark Biosphere mallee region, which covers over 1,000,000 hectares. The countryside was a lot drier along here as most of the rainfall in previous weeks had not made it this far south. Along the way we stopped at Lake Victoria, a large dam on the Murray River, and picked up species such as Australian Darter, Yellowbilled Spoonbill and White-breasted Woodswallow. Soon afterwards we ventured off the beaten track in search of our last Grasswren species: Striated Grasswren. Our first stop however was at a Red-lored Whistler territory, where the male was singing on cue and allowing great views at close range. We then continued to Birds Australia’s Gluepot Reserve on the edge of which we found a small flock of Yellow-throated x Black-eared Miners, containing at least two pure-bred Black-eared Miners. Our last grasswren species, the Striated, proved difficult to find, and not until we had searched numerous patches of spinifex did we eventually get good views of one singing male Striated Grasswren on a bare branch of a dead shrub. Other species we picked up here included Southern Scrubrobin, Shy Heathwren, Chestnut Quail-thrush, Gilbert’s Whistler, Crested Bellbird, Hooded Robin, Striped, Yellow-plumed and Brown-headed Honeyeater and White-browed Treecreeper. After leaving Gluepot behind we briefly stopped at one of the weirs on the Murray river, mentally washing the dust away, and observing Whistling Kite on a nest. Our tour finished with a drive to Adelaide, picking up Redthroat and Brown Songlark on the way.