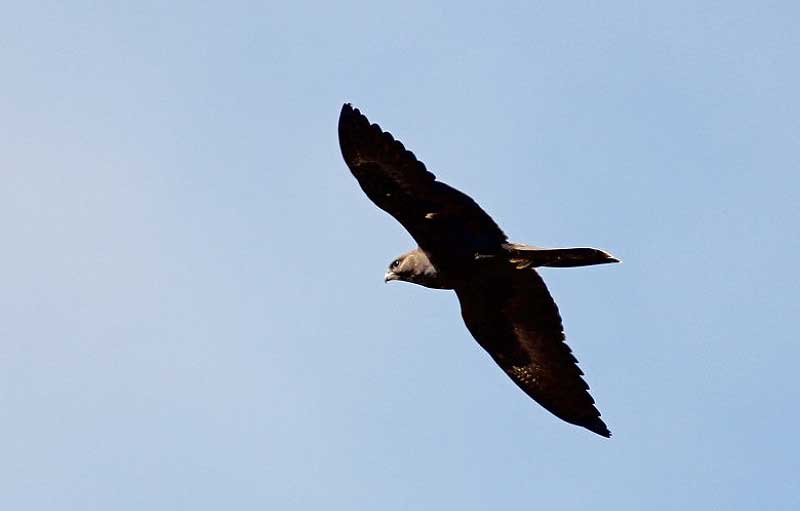 This was the second 2009 ‘Five Grasswren’ birding tour run by Southern Birding Services. The first one (22-27 Oct.) ran the standard itinerary (Strzelecki track – Cameron Corner – Tibooburra) with views of all 5 target species of grasswren, but due to excellent conditions being reported from the Birdsville track, I decided to focus the second ‘Five Grasswren’ tour on that area for a change. The trip turned out to be the experience of a lifetime for the participants with everything from 45°C (113°F) heat to flooding to be contended with and a true outback birding bonanza, with sightings of Brolga, Bustard, Flock Bronzewing, Australian Pratincole, Inland Dotterel, Letter-winged Kite, Black Falcon, all 5 Grasswrens, all 5 chats, Banded Whiteface, Ruff, Oriental Plover etc etc…

There were four participants on the trip. We departed Adelaide late in the afternoon and headed for Waikerie. We tried a few roads in open Mallee eucalypt shrub country around Blanchetown looking for Southern Hairy-nosed Wombat, but we only saw a dead one on the road. We had our first sightings of some good species including Orange Chat and Chestnut-crowned Babbler. A juvenile Little Eagle flew up at arm’s length, and we saw plenty of Western Grey and Red Kangaroo (including one hopping over a fence).

We headed out early to Birds Australia’s Gluepot Reserve. At sunrise we tracked down some good birds including Chestnut Quail-thrush, Red-backed Kingfisher and Southern Scrub-Robin. Then we drove a fair way east to find a resident pair of Red-lored Whistlers in their habitat, a large patch of spinifex-grass covered sand dunes with low, shrubby mallee overstorey. It took about half an hour before the male started singing but then they were easy to track down and we got good looks. Then it was time to look for our first Grasswren, a Striated. Due to the ongoing drought, their numbers had dropped significantly in recent years. We tried a few different locations; we heard one once at the first site but did not catch a glimpse. We tried a second site, then back to the first, then on to the third. Still nothing.

By the time we reached a fourth location it was the middle of the day and 45°C (113°F) according to Gluepot’s weather station. At this site we split up, using walkie-talkies to keep in contact. Soon enough a bird was located and the groups re-joined at the spot where the ‘finders’ had it surrounded. Fortunately, one dashed from a spinifex clump and we were able to follow it. We eventually had good views of it sheltering from the heat in a dense shrub. That afternoon we were due to drive to the Flinders Ranges but when our rented Toyota Landcruiser 4WD started blowing hot air out of the airconditioner we had to head back to Waikerie. Budget sent out a new vehicle which we picked up in Morgan (after seeing Regent Parrot along the Murray River) and we continued on to Peterborough that evening to stay there.

After another early start we arrived in the Flinders Ranges to search for Short-tailed Grasswren at Stokes Hill. It didn’t take long before we saw a pair at a distance foraging between clumps of spinifex. After a while we had good views of one grasswren quite a bit closer. In an attempt to approach it even closer to photograph it, the bird escaped by disappearing down a rabbit burrow and staying there. This seems to be known behaviour for certain species of grasswren but has not been recorded yet for Short-tailed Grasswren. We proceeded along the track through the Brachina Gorge, where amongst breathtaking scenery consisting of steep cliffs and narrow gorges in various hues of red we observed a Collared Sparrowhawk drinking from a creek, and saw various species of Honeyeater while Grey-fronted was singing from tall Eucalyptus trees. A little further, at a rockfall, a few endangered Yellow-footed Rock-wallabies were present. Following the geological trail, where various layers ranging in age between 500 and 800 million years show, we ended up leaving the Flinders Ranges for the stony outback plains which closer to Lyndhurst gave way to the Strzelecki desert.

At Lyndhurst it didn’t take long to get our second grasswren of the day, with a couple of Thick-billed Grasswrens at Mt Lyndhurst station. One gave great views, and we also got the first of several Cinnamon Quail-thrush and a Rufous Fieldwren. We had lunch at the Lyndhurst pub and as we stepped outside in the (again) 45°C heat we saw two Inland Dotterels at the edge of the carpark. Not really the environment in which people expected to finally tick off that species! We continued on through Marree and onto the Birdsville Track to our base for the next two nights at the Mudgerannie roadhouse. In the evening we headed out to a nearby communications tower where a Grey Falcon had been seen a couple of times in the last few weeks. We dipped on that, but we did manage to track down several Eyrean Grasswrens on nearby dunes. We suspect a couple of them also disappeared into a rabbit burrow. Banded Whitefaces were an unexpected bonus.

After an even earlier start we headed out into the remote outback landscape consisting of seasonally inundated swamps (now dry), sandy deserts with sand dunes running for miles, and stony ‘gibber’ plains. First target was Grey Grasswren, which we got onto quickly and eventually turned up 6 individuals. That meant we’d got all five target grasswrens in less than 48 hours! Other birds seen there included quite a few Pied Honeyeaters, and three Australian Bustards. Then we headed further along the track and found huge numbers of Flock Bronzewings on grassy plains. They were seemingly everywhere, our estimate was about 8,000. Flocks took off on both sides of the car as we drove, and would land again providing great photo opportunities.

Next stop was a waterhole where we saw another Inland Dotterel at close range and then had good views of 4 nesting Letter-winged Kites. While we watched them, huge flocks of Flock Bronzewings continued to go past. There were also Black Falcons, various other raptors, a Pied Honeyeater and flocks of Zebra Finch. One client commented that they had never been to a site with so many top quality birds in such a short time anywhere in Australia. Then we headed for the Yellow Chat site. It was bizarre to drive through hot dry land and then come to this artesian bore with boiling water spraying out everywhere and lots of waterbirds. After sorting our way through lots of Orange and Crimson Chats we eventually located two distant Yellow Chats, which provided good scope views. There were lots of other waterbirds and waders present too; four Oriental Plovers and a Ruff were surprises, a lone Plumed Whistling-duck and there were at least forty Australian Pratincoles. On the way back we saw more Eyrean Grasswrens in the sand dunes.

We woke up to a cooler, overcast morning. It was time to head south. Stops along the way produced nice species such as White-backed Swallows, Diamond Doves and Brolgas. Red-browed Pardalotes were calling from creek crossings. Main target for the day was Gibberbird and it didn’t take too much time to find a pair which we saw well. This meant it had been a 5 chat tour as well as a 5 grasswren tour…! As we returned to the track from looking at them we disturbed a flock of 25 Inland Dotterels. Heading to Marree things started getting wetter – we’d had a few drops of rain at Mungerannie but it was clear there had been a lot of rain since we had come through in the other direction. The road got very slippery as we got to Marree and we started to worry about the track being closed there. Luckily they hadn’t done so (yet) and we could continue. There was lots of standing water and the driving got harder.

When we finally hit the bitumen just before Lyndhurst we thought the worst had passed but it wasn’t to be. First we had to cross some meter deep water to enter Lyndhurst. Luckily the car had a snorkel as the bow wave came over the bonnet and up the windscreen…! Then in Lyndhurst we learnt the first section of the Strzelecki track was impassable after 55mm of rain (half of their annual average) so we weren’t going to be able to look for Chestnut-breasted Whiteface. We decided to head as far south as we could because of the risk of further rain stranding us. In fact if we had done the trip a day later we’d still be stuck in Marree. Unfortunately we only made it to Leigh Creek before a fastflowing creek meant the end of progress. We drove 320 km that day before seeing a single other car.

Luckily by the morning the creek was lower. Further south there was still water everywhere and trees and sandbars across the road at creekbeds. We saw a few Banded Stilts at Port Augusta and spent some time at the botanical gardens nearby (Pied Honeyeaters and Chirruping Wedgebills) and ended up at Port Gawler where Slender-billed Thornbills performed well in the coastal samphire. Our tour finished with a drive to Adelaide, picking up Elegant Parrot on the way.