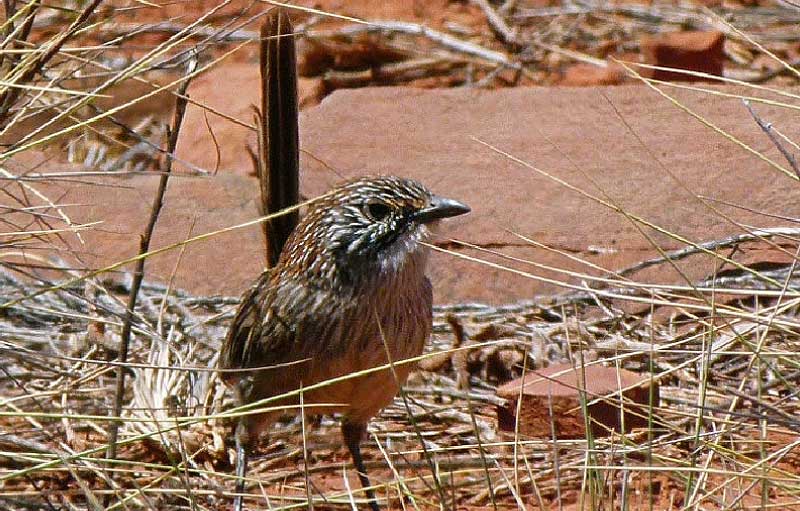 The year 2010 will long remain in birders’ memories as one of the best years ever for outback birding. Following years of drought, rain had been falling in the outback since November ’09 and seemingly didn’t stop. Every few weeks another major front dumped inches and inches of rain in the parched deserts resulting in conditions, described by one Aboriginal elder, as ‘never seen before by white people’. Creeks flowing for months on end; inter-dunal swales retaining water well into spring; carpets of purple, pink, yellow, white and red wildflowers; and of course, bird activity second to none. The downfall of all this water was that many of our tours had to have last-minute changes to the itinerary due to road closures and flooding. Nevertheless, thanks to the ingenuity of our staff we almost always found a way to the birds! The October Southern Birding Services Five Grasswren tour, with 8 participants and 2 guides, departed from Adelaide in the morning of 11 October and again, the threat of rain was looming in coming days. We were forced to compress the outback component of the tour by one day but nevertheless this trip was, according to the participants, ‘fantastic’ – ‘fabulous’ – ‘amazing’ etc…! Highlights were all five Grasswrens (yes including Grey!), Inland Dotterel, Australian Pratincole, Letter-winged Kite, Bourke’s Parrot, Cinnamon Quail-thrush, Ground Cuckoo-shrike, Chestnut-breasted Whiteface, 4 chats including Gibberbird, etc etc….

At our first stop along the coast north of Adelaide (SA), we spotted the rosina race of Slender-billed Thornbill. A lone Purple-crowned Loriket landed in a nearby bush, quite unusual in this habitat. Further north we saw a small group of Banded Stilt, including immatures, which had most likely come from the 100,000 strong colony in Lake Torrens. It was warm and very windy, conditions far from ideal for observing Short-tailed Grasswrens in the Flinders Ranges, but after two hours of searching we were rewarded with great views of a single bird. It was then off again, through the spectacularly rugged Brachina Gorge, where the endangered Yellow-footed Rock-Wallabies appeared as on cue, and a little later, two pairs of Grey-fronted Honeyeaters were quietly feeding in a big gum tree. We arrived in Lyndhurst (SA), our destination for the night, well after sunset.

The next morning, a decision had to be made that would affect the rest of the tour. Because of the threat of heavy rain which was forecast for Wednesday, the original plan to go up the Birdsville track was abandoned because the risk of becoming stranded was considered to great. Instead we reverted to the tried-and-tested itinerary of going east via Cameron corner (Qld) and Tibooburra (NSW). This meant we’d forgo our chance of Yellow Chat but gain a chance of Bourke’s Parrot. So early that morning we set off searching the plains and hills along the Strzelecki track, and within 10 minutes we were watching a party of Chestnut-breasted Whitefaces! Unbelievable…. there were at least 10 birds here, including immatures, a sign of a good breeding season. One of the participants had tried 7 times before and failed to see these very rare and localised birds. But it didn’t stop there, as nearby, we had great views of a singing Rufous Fieldwren; two male Cinnamon Quail-thrush were courting, then fighting over, one female; Thick-billed Grasswrens were dancing around a sand mound, and later one bird popped up onto a rock about 5 metres away allowing excellent and prolonged views and photographs.

An elated group of birdwatchers returned to the vehicles for the drive up north. No rest for the wicked, though, as for many, the more common species such as Rufous and Brown Songlark, Chirruping Wedgebill, flocks of Zebra Finches, Crimson and Orange Chats, Diamond Doves, Budgerigars and Cockatiels, were new, and for others, they provided excellent photo opportunities. A Gibberbird was flushed from the road, then observed at close range. The weather was excellent, calm, clear blue skies and 29 deg. C, which felt a bit warmer once we started trawling through the white, vegetation-covered sand dunes on foot in search of Letter-winged Kite. After about twenty minutes euphory overtook many as two Letter-winged Kites flew over our heads, then landed in a nearby tree. Camera shutters clicked non-stop… the first memory cards were already full and the tour was only two days old! We came across two family groups of Inland Dotterels, and at an inundated swamp, Australian Pratincoles allowed close views and photographs. We seemed to flush a Little Buttonquail every time we went for a walk, and while driving, saw more Cinnamon Quail-thrush, and Gibberbirds, as well as the odd White-backed Swallow. Over the red sand-dunes of Merty Merty we went, up and down, until it was dark and a tired, but very happy group of birdwatchers rolled into Cameron Corner (Qld) for a meal and a sleep….

The next morning, we awoke to grey skies and light drizzle. Had the rain finally caught up with us? After a quick and basic breakfast we returned to nearby red sand dunes and searched for Eyrean Grasswren and found these after about an hour. But the wind and occasional drizzle meant the birds were keeping a low profile, only occasionally popping up on a dead shrub allowing distant but identifiable views. We then returned to Cameron Corner for a proper breakfast, and were told by the staff if the rain would intensify and if we weren’t going to leave soon, we’d get stranded there for at least a few days! So off we went, through Sturt NP until we got to Tibooburra (NSW) at lunchtime. Here we found to our shock and horror that the road south, our only route out, was already closed due to rain. Over lunch a cunning plan was devised to twitch Grey Grasswren and still get out before more rain would fall. We headed up to an area of swamps in the vast Bulloo River overflow (Qld), driving through what would normally be pretty bare gibber plains, now resembling English meadows. Insect larvae exposed in the bare sand of the very recently graded road attracted great numbers of Australian Pratincoles. To the group’s great excitement, small flocks of Flock Bronzewing were flushed more than once. Upon arriving at the swamp, we found it – not surprisingly – inundated. Within minutes of searching the lignums on the dry edges, a Grey Grasswren was found, followed by 3 more. It was very unusual to see these birds dart from lignum bush to lignum bush flying across the water. Good scope views were had by all and after quickly fixing a flat tyre we arrived back in Tibooburra (NSW), ready for the long drive south. Most unexpectedly the rainclouds had disappeared, and the road was open again, so we dediced to go halfway to Broken Hill (NSW) and spend the night at the Packsaddle Plains Roadhouse. A good meal, good company, good birds – no surprise it was a party-like atmosphere at dinner time!

Sunrise the morning of 14 October was beautiful, dazzling an orange glow through the fog over the grassy plains surrounding the Roadhouse. We went for a pre-breakfast stroll and found a nice pair of Bourke’s Parrot which allowed excellent views – a tick for many. Soon thereafter two Ground Cuckoo-shrikes flew past and were later found foraging on a grassy field. After breakfast we headed south, birding along the way, until we arrived in Broken Hill (NSW) for lunch – and some much-needed ‘mobile phone time’. The busy lunchtime traffic, people, shops, noises seemed like a sensory overload after 4 days in the outback and we were glad to be on the road again. In the Casuarina and Pine forests lining the road we found small numbers of the beautiful Major Michell Cockatoo, allowing good photo opportunities, as well as other species of parrots including Blue Bonnet. Our next stop was Wentworth, at the junction of Australia’s great rivers, the Murray and the Darling, both brimming with water – quite a difference from previous years. Little Friarbirds, Blue-faced Honeyeaters, Yellow Rosellas were some of the species we found here as well as a Nankeen Night-heron. We finally had time for a proper dinner in the Thai restaurant which was much appreciated by all. But that evening it started pouring and it continued to rain all night long.

The next morning, it was still raining, it turned out there had been 38mm in Tibooburra (NSW) and all roads were closed up there, so we had made the right decision to head south just in time. Time to enjoy a leisurely breakfast before another ingenious plan was devised to score Striated Grasswren in case there would be problems getting into Gluepot later in the tour. So after getting the tyre fixed in Mildura (Vic) we continued on to Hattah NP (in the pouring rain) where, to buy time, we had morning tea at the picknick shelter near the Lake (also brimming full). A small flock of Regent Parrots raced past. The rain didn’t stop but undeterred we set off searching nearby spinifex-grass covered sand dunes with low mallee eucalypt scrub. Despite the rain an obliging pair of Chestnut Quail-thrush was observed and after about an hour of searching we heard a Striated Grasswren calling, and it was soon tracked down, and as it perched on a branch singing to its’ heart content, camera shutters clicked overtime. The rain intensified and we decided to get out of there, and via a lunch stop in Ouyen (Vic) drove to Loxton (SA) where better views of Regent Parrot were had in a floodplain reserve along the Murray. Our arrival in Waikerie (SA) coincided with that of two other birding groups, all to find out that the road to Gluepot (our destination for the next day) had been closed due to heavy rainfall. There was no point in trying – Gluepot has its name for a reason!

The last day was therefore spent picking up as many ‘Mallee’ species as possible in areas surrounding Waikerie and the River Murray. At Morgan we had a productive morning with species such as Chestnut Quail-thrush, Redthroat, White-winged Triller, Crested Bellbird and a White-browed Treecreeper – a tick for some. At Brookfield Shy Heathwren was only heard but we added Varied Sittella, Gilbert’s Whistler and a pair of very obliging Southern Scrubrobins. On the way to Adelaide we caught up with Musk Lorikeet which had eluded us until then. At the end of the day, participants were returned to their pickup point, all agreeing that it had been a successful, jam-packed tour despite the frequent schedule changes due to the weather.