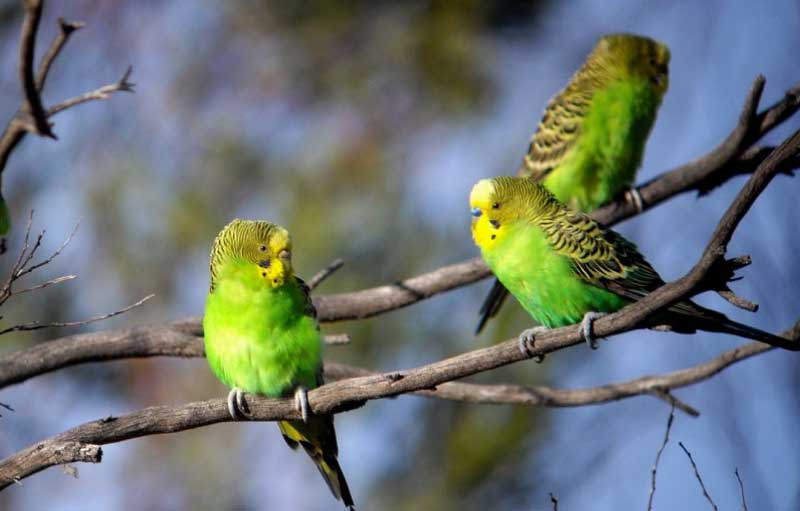 The weather was fine and unseasonably warm, and there appeared to be no drought conditions although rain had not fallen for quite some weeks. Wildflowers were starting to appear in the Flinders Ranges and Strezelecki Desert. Exceptionally good food and decent accommodation, as well as a well-organised itinerary, knowledgeable guide and skilled driver made this trip a success.

August started crisp with some small fog patches as we went for a short walk through the parklands of North Adelaide. Eastern Rosellas, a Striated Pardalote and plenty of Noisy Miners were present; Adelaide Rosella was notable for its absence. After breakfast it was off to St Kilda where no less than 20 Royal Spoonbills were roosting in the mangroves Between them 2 Great Egrets and Little Pied, Pied, Little Black and Great Cormorants were present. At least 30 Black-tailed Native Hens were feeding on the shore below them. A little further up the road, at Pt Gawler, Slender-billed Thornbills were seen from the bus and good scope views obtained once everyone had alighted. We followed the main road towards Pt Augusta and a pre-lunch walk at Nelshabby resulted in Black-faced Cuckoo-shrike, a male White-winged Triller, and a number of Corvids at the dam that kept us busy identifying eventually all three SA corvids ­ Little Crow, Little Raven and Australian Raven. A late afternoon visit to Telowie Gorge resulted in everyone finally connecting with Adelaide Rosella but more importantly, two pairs of very obliging Grey-fronted Honeyeaters which was a tick for many. A Southern Scrubrobin was calling close by in the dense undergrowth and along the scenic dirt road back towards the main highway we found Brown Songlark and Elegant Parrot.

Purple-crowned Lorikeets were in abundance at the Port Augusta golf course. The morning was spent in the wonderful Arid Lands Botanical Gardens where the first of many to ­ come White-winged Fairy-wrens was observed. A nice male Redthroat was singing providing good scope views and Chirruping Wedgebills were seemingly everywhere. An unexpected find was a singing Black-eared Cuckoo, a tick for some. A daredevil Yellow-throated Miner landed on the gravel guard on the front of the bus while we were leaving the car park. At Jarvis Lookout near Hawker, a rather steep climb to the top was rewarded with a top-down view of a Grey Butcherbird on a nest and some Inland Thornbills. An early Shingleback lizard, no doubt awakened by the warm weather, joined us for lunch as did a Tawny Dragon. As did a welcome Gilbert’s Whistler mid sandwich, as usual. Mid-afternoon we arrived at Stokes Hill and commenced the search for Short-tailed Grasswren in the bare spinifex covered hills. Some slightly unusual looking characters appeared to be doing the same, but rather than using binoculars and their ears, they were beating the spinifex bushes. Within 20 minutes we had located the first Short-tailed Grasswrens, much to the excitement of the group as this was a tick for all. The best was yet to come though, as after another 20 minutes we came across a pair of grasswrens that in response to pishing put on the ‘injured mouse’ display and came to within a meter of the observers¹ feet! A chat with the bush-bashers revealed that their technique had yielded them fleeting glimpses of 5 grasswrens in 6 hours. All three resident species of Kangaroo were observed (Euro, Red and Western Grey). That evening a well-deserved dinner was had by the log fire in the Wilpena Pound restaurant.

A scenic drive including two creek crossings through the Bunyeroo and Brachina Gorges tested the driver¹s skills. Following good summer and autumn rains the Flinders Ranges looked green and some wildflowers were starting to appear, with fields of twinleaf and yellow wattle as well as the introduced onion weed. Yellow-footed Rock-wallabies were found at the usual location and a bit further along an Elegant Parrot. After lunch at Aroona Dam near Leigh Creek (which yielded an early Australian Reed Warbler) it was off to the start of the Strzelecki track at the Mt Lyndhurst area. Participants wondered whether any birds would be present in the desolate landscape, which was reminiscent of Mars in places. However within 20 minutes of commencing the search everyone was staring at Thick-billed Grasswrens and not long afterwards 2 Chestnut-breasted Whitefaces, ticks for all participants! A search for Cinnamon Quail-thrush appeared in vain however but did yield another nice scope view of a third Chestnut-breasted Whiteface as well as a Rufous Fieldwren. Finally, just before sunset two Cinnamon Quail-thrushes were located closer to Lyndhurst, another tick for most.

A big day as we went as far as 300 km up the Strzelecki Track before turning around and going back the same way. The sparsely vegetated undulating landscape closer to Lyndhurst made way for gibber plains devoid of any vegetation, but the Strzelecki desert was a sudden change to small, white sand dunes topped with prickly bushes and cane grass. Along the way there were tree-lined dry watercourses every few kilometers and many of these were checked for birds. Four species of Woodswallow were found (White-breasted, Black-faced, White-browed & Masked), as well as Diamond Doves and flocks of Zebra Finches. Each Australasian Pipit flying off from the track was checked carefully but alas, no Gibberbird. Beautiful bright Crimson and Orange Chats were around in small numbers. Welcome Swallows and Tree Martins were plentiful to the effect that the driver remarked ‘here’s another swallow but I won¹t bother you with that’. It turned out to be a White-backed Swallow ­ a tick for most. At Montecollina Bore lunch was had in the picnic shelter, while under the roof Fairy Martins were busy doing up their nests. Along the water¹s edge an Australian Spotted Crake gave good views under the supervision of a lone Little Pied Cormorant in the only tree. More White-backed Swallows flying around as two Budgerigars came in to drink. After lunch, a search of the surrounding dunes yielded a party of 4 Eyrean Grasswrens which after an initial game of cat-and-mouse provided excellent views. A tick for all participants, and one that many had not dare hope for! We then set off to the Strzelecki Creek crossing in search for Letter-winged Kites, but these were not to be found. The landscape made up for it though – vast fields of yellow (Fleshy Groundsel) and yellow-and-white (Poached Egg Daisy) wildflowers interspersed with the odd purple (Darling peas), blue (Bluebells), red (Rosy Dock) or silvery (Silvertails) flower. This flowering feast attracted a massive activity of birds: the sky was filled with the chatter of Budgerigars, White-winged Trillers and Woodswallows and the song of honeyeaters and songlarks. As the sun was getting lower it was time to return. After an hour’s drive the driver exclaimed: ‘Time to stop and swap drivers’. No sooner had he opened the door or a Pied Honeyeater was heard singing, another tick for many. There turned out to be four males and good scope views were had by all, while a Chirruping Wedgebill was providing background music. It was a tired, but satisfied group of birdwatchers that rolled into the Leigh Creek restaurant much later that evening.

An early morning walk around Leigh Creek resulted in one new species for the trip list: Yellow-plumed Honeyeater. We then set off for the trip south, picking up more Elegant Parrots, some Blue Bonnets and a White-winged Triller and a Little Eagle eating a rabbit on a tree stump at a stop at Hookina Creek near Hawker. Abandoned farmhouses dotted the landscape and while some farmers appeared to be still hanging on, one farm in particular appeared to have completely turned the landscape from into a drought-ridden, over-grazed dustbowl with tree skeletons ­ a stark contrast with the dense, ungrazed vegetation along the roadside. Not far from there a sign indicated the Goyder’s Line which indeed was a stark difference in the landscape: all of a sudden we were back in the vivid green wheatfields and gum forests of the Mt Remarkable ranges. A lunch stop at pretty Melrose yielded the 5th Woodswallow for the trip: Dusky, and some rather yellow Adelaide Rosella¹s kickstarted another debate about splitting or lumping.

It was then on to Beetaloo Reservoir where we picked up a Chestnut Teal, a flock of Hoary-headed Grebes and a party of White-winged Choughs as well as some Red-necked Wallabies. The final leg of the trip was to the Clare Valley with Goldfinches and Musk Lorikeets added. Over a sumptuous dinner in Auburn the final birdlist was compiled: 133 species and all participants had new ticks.