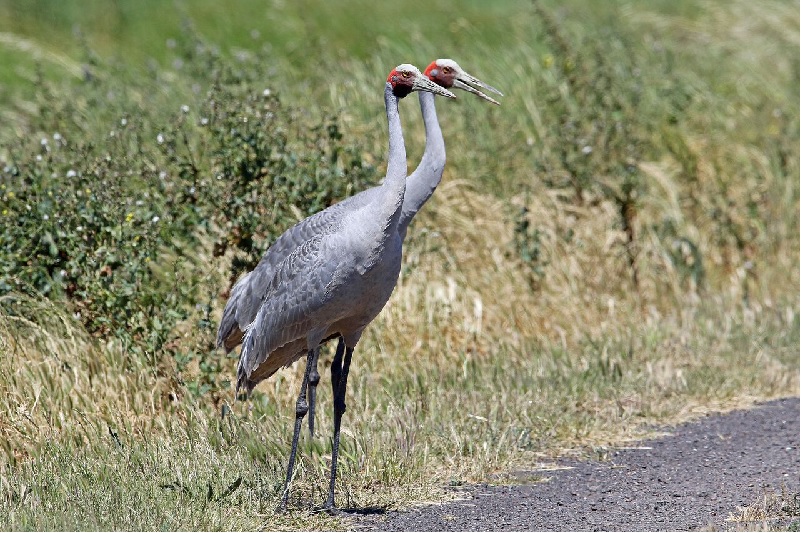 The Great Southern Tour concentrates on the many specialties of the southern coastal region of Australia and the South Australian outback. Coastal birding north of Adelaide and along the Great Ocean Road; the outback deserts and dry watercourses, with the rugged escarpments of the Flinders Ranges; Birdlife Australia’s splendid Gluepot reserve, the Murray River, we wander the plains around Deliniquin and marvel at the masses of waterbirds in Werribee to finish in the tall, hill forests near Melbourne.

Started with great views of a pair of rare Square-tailed Kites at their nest near Adelaide. A nearby wetland provided excellent views of Blue-billed, Musk and Pink-eared Duck while an Owlet-nightjar did not disappoint at its daytime roost. Other good birds seen during the day included Purple-crowned Lorikeet, Diamond Firetail and  a large flock of Cape Barren Geese.

An early departure for the drive to the outback and at the first stop, the range-restricted Slender-billed Thornbill put in a good show. Further north, the group had good views of Little Eagle and Elegant Parrot while a small flock of Banded Stilt was observed foraging near Port Augusta. The Arid Lands Botanical Gardens did not disappoint with a variety of Honeyeaters including Pied and White-fronted; while closer to Lyndhurst, a pair of Rufous Fieldwren performed on cue.

A day in the outback around Lyndhurst. The group birded the start of the Strzelecki track as well as various sites north of Lyndhurst. A variety of good outback species were seen including Budgerigar, Red-backed Kingfisher, Zebra Finch, Cinnamon Quail-thrush, Rufous Fieldwren but the highlight was no doubt a nesting Black-breasted Buzzard with 2 chicks.

The scenic Flinders Ranges National Park was the focus of today. As the group travelled through the Brachina Gorge, a narrow river bed cut deeply into steep rock formations, birds such as Elegant Parrot, Grey-fronted Honeyeater and Redthroat were added to the list. The cute – and rare – Yellow-footed Rock-wallaby posed for photos while the spinifex-covered hills further afield eventually gave up their secretive Short-tailed Grasswren with no less than 3 birds seen!

The morning was spent further exploring the Flinders Ranges with Southern Scrubrobin, Inland Thornbill, Black-eared Cuckoo, Redthroat and Rufous Songlark. A scenic drive through rolling fields to the Murray river yielded Stubble Quail and Brown Songlark and at the river itself, a lone Regent Parrot was found amongst Yellow Rosellas.

The damage of a severe thunderand hailstorm last night was visible in the orchards and trees around Berri but the birding was not affected. Great views of a hunting Little Eagle, a White-backed Swallow at its nest, and Yellow Rosellas were had before we headed off to Hattah NP in W Victoria where the endangered Regent Parrot put in a beautiful appearance while Blue  Bonnets continued the parrot theme.

The weather had turned foul with rain and wind so despite a 4 hour wait at the Malleefowl mound no birds were seen. We did, however, have great views of Mallee Emuwren and Striated Grasswren while Major Mitchell Cockatoos flew overhead. Then it was off ot Deniliquin in the pouring rain!

One of the best days’ birding of the trip. A beautiful morning was spent birding the floodplain forests near Deniliquin with superb views of Superb Parrots and Crested Shrike-tit while other good species included Western Gerygone, Hooded Plover, Painted & Little Buttonquail, Whit-throated Treecreeper, White-winged Triller, Horsfield’s Bushlark and many more. In the afternoon, wetlands produced Black-tailed Native-hen, Brolga, Pink-eared Duck, Red-kneed and Black-fronted Dotterel and Swamp Harrier. The night spotlighting excursion was fantastic with views of Tawny Frogmouth, Owlet Nightjar, Blue Bonnet and Aust Hobby while it was still light, and after dark, Banded Lapwing, Little Buttonquail and a stunning male Plains Wanderer.

We continued yesterday’s good run with views of Australian Bittern (twice!) at a local wetland as well as Nankeen Night-heron while Little Bittern was heard, and further south at Heathcote, Speckled Warbler, Shining and Fan-tailed Cuckoo were highlights while the You Yang ranged providen stunning photo opportunities of Spotted Pardalote and Yellow-tailed Black Cockatoo.

One of the best days’ birding of the trip (again)! We birded the eastern end of the Great Ocean road where the coastal heath offered great views of Chestnut-rumped Heathwren, Southern Emuwren, Tawny-crowned Honeyeater, Blue-winged Parrot and Rufous Bristlebird. Moving onto the temperate rainforests, we enjoyed watching Rose Robin, Satin Bowerbird, Gang-gang Cockatoo, Brush Cuckoo and Olive Whistler while at sea, we identified Black-browed and Shy Albatross together with Australian Gannet and Black-faced Cormorant.

The morning was spent at the Western Treatment Plant (Werribee). Normally a haven for waterbirds, today the focus was on picking up small brown birds and we had great views of Striated Fieldwren, Horsfield’s Bushlark, Australasian Pipit, Eurasian Skylark and Golden-headed Cisticola. A pair of Brolga and thousands of Australian Shelducks provided great views while amongst the Whiskered Terns, one White-winged Black Tern was identified.

Final day of the tour! We started in the tall, dense hill forests east of Melbourne where Superb Lyrebird, Red-browed Treecreeper, Pink & Flame Robin, Cicadabird and Olive-backed Oriole were added to the list. After a sumptuous goodbye lunch the happy tour participants were returned to their hotels in the city, but not before finishing with a ‘bang’: a pair of Powerful Owl with a chick!