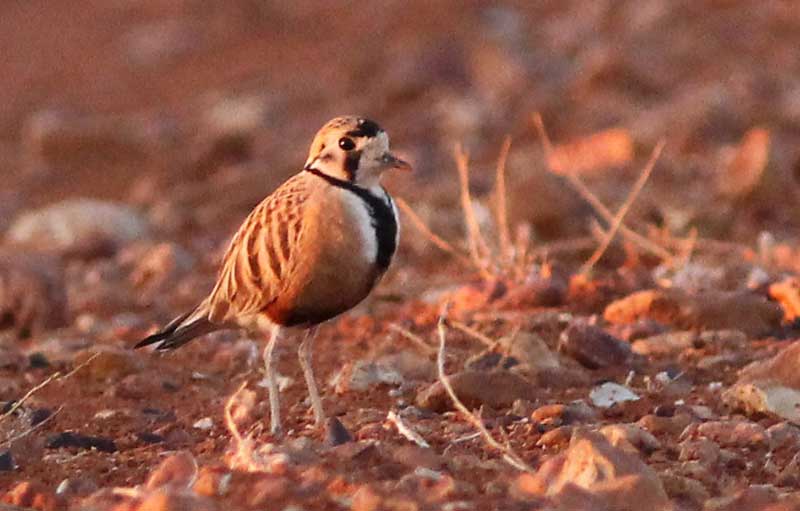 This exciting 13 day tour specifically concentrates on the many specialties of the southern regions of Australia, parts of the outback and the great inland rivers. During the tour we found 268 species and experienced an amazing variety of landscapes and habitats, such as the Murray River, Flinders Ranges, mallee reserves, Deniliquin, Yarra Ranges, the Great Ocean Road and the Werribee Treatment Plant. The trip included some of Australia’s hardest to find, yet most sought-after species: Plains Wanderer, Mallee Emu-wren, Black-eared Miner, Superb Parrot, Pilotbird and many others.

Day 1. Pt Gawler – Pt Augusta
The tour started with a visit to the coastal mudflats just north of Adelaide, where we enjoyed views of many shorebird species as well as 100’s of Black Swans, while Pied and Sooty Oystercatcher, Common Greenshank, 40+ Black-tailed Native-hens and a lone Pacific Gull foraged in the shallows. A Collared Sparrowhawk caught one of the local House Sparrows. Further north, at the Adelaide International Bird Sanctuary, we added Superb Fairy-wren, White-fronted Chat, Australian Spotted Crake, Pied & Banded Stilt, Royal Spoonbill and many species of waterfowl. Overhead we saw Adelaide Rosella, Galah and Little Corella. At the mangroves, we observed a pair of Elegant Parrots, White-browed Scrubwrens and a Swamp Harrier. Heading north to Port Augusta we picked up a few species along way including Australian Kestrel, Spotted Harrier and Brown Falcon. At the Arid Lands Botanic Gardens in Port Augusta we found a flowering Eremophila full of Honeyeaters including Singing, White-fronted, Spiny-cheeked, White-plumed and our target, Pied Honeyeater.

Day 2. Pt Aug – Kimba – Wilpena
An early start saw us heading west to the bush near Kimba. On the way we were quite fortunate to have a pair of Major Mitchell’s Cockatoo. Our first stop produced a good array of birds including Varied Sittella, Jacky Winter, White-eared Honeyeater, Chestnut-rumped Thornbill and a pair of Blue-breasted Fairy-wrens. Closer to the lake the bush delivered another specialty, the Rufous Tree-creeper, along with Inland Thornbill, Red-capped Robin, and the Port Lincoln race of the Australian Ringneck. Heading back to the Arid Lands Botanic Gardens we enjoyed lunch with Southern White-faces and White-winged Fairy-wrens. We travelled north east into the amazing Flinders Ranges where to our great surprise we saw a pair of Ground Cuckoo-Shrikes on the road, south of the main entrance. Many Wedge-tailed Eagles, Whistling and Black Kites graced the air and we soon got onto some great views of Emu. The many mammals we saw included Red Kangaroo, Western Grey Kangaroo and Common Wallaroo.

Day 3. Flinders Ranges
A full day in the beautiful Finders Ranges after a hearty breakfast. Many of the Kangaroos lined the road as we made our way to a local dam. Birds coming in for a drink were Red-rumped Parrot, Mulga Parrot, Brown-headed, Singing and Spiny-cheeked honeyeater. Further into the ranges we explored the impressive Brachina Gorge. Along this water course we had brilliant views of a pair of Little Eagle, Purple-backed and White-winged Fairy-wrens and a pair of Redthroat. Here we were also treated to great sightings of the threatened Yellow-footed Rock Wallaby. On the way back we got onto another target bird, Grey-fronted Honeyeater. Back at the resort we did a predinner walk and had close views of Australian Ringneck, Yellow Thornbill, Weebill, Apostlebird and Common Bronzewing.

Day 4. Wilpena – Burra – Berri
A travelling day today while birding en-route. We began with a stop near the township of Hawker, where we had an obliging Australian Hobby followed by Black-faced Woodswallow, Rufous Whistler and Southern White-face. Once we arrived at the River Murray birds were all around us, with Pied Butcherbird, numerous waterfowl and ducks including Australian Shoveler, Musk Duck, Chestnut and Grey Teal. Along the shoreline were Pied Stilts and Yellow-billed Spoonbills, Red-kneed Dotterels, and Australian Swamphens. At a lagoon we encountered around 500 Red-necked Avocets and almost as many Whiskered, Crested and Caspian Terns.

Day 5. Berri – Calperum – Berri
An early start to explore the vast mallee (eucalypt bush) wilderness that extends nortwards from Berri. We commenced the morning with a very obliging Chestnut Quail-thrush, one of the area’s specialties, while a Crested Bellbird was seen nearby. The topography of the mallee bush consisted of long east-west bush-covered sand dunes while in between, the flat valleys have larger trees. Some open areas with thorny acacia shrubs and saltbush flats complemented the picture. We spent the entire morning birding through here and quickly racked up the specialties of the area, including Gilbert’s Whistler, White-browed Treecreeper, Southern Scrubrobin, Striped Honeyeater, White-winged Fairy-wren, Shy heathwren, Little Eagle and Redthroat. Returning to civilisation midafternoon we birded the wetlands and swamps around the Murray river, which yielded Whistling Kite, Yellow Rosella, White-fronted Honeyeater, White-backed Swallow and flying views of Regent Parrot.

Day 6. Berri – Murray Sunset – Ouyen
The morning was spent birding another huge area of mallee bushland to the east of Berri, in which the undergrowth consisted mainly of the spiky spinifex grass. In this habitat we saw all the local specialties including Red-lored Whistler, Southern Scrubrobin, Striated Grasswren, Mallee Emu-wren and White-eared Honeyeater. We then drove to the township of Ouyen, where more birding awaited: the vegetation around the edge of town yielded Pied Honeyeaters, Blue Bonnet, a lone Budgerigar and mixed flocks of woodswallows consisting of Masked and Whte-browed

Day 7. Ouyen – Hattah – Deniliquin
We waited for hours at the active mound of a Malleefowl but alas, the bird wouldn’t show, likely due to the unseasonally cold weather for the day: thick cloud cover prevented the temperature from rising above 10C for the entire morning, while malleefowl tend to their mound to adjust it to the changing temperature throughout the day. Time was up so we moved on, but not after obtaining cracking views of two pairs of Regent Parrots. Along the drive to Deniiquin we stopped in various locations and picked up Orange Chat, Crimson Chat, Cockatiel, Whitewinged Triller and Eastern Rosella.

Day 8. Deniliquin area
A huge day around Deniliquin resulted in over 120 species seen! We started off early with a visit to a nearby swamp where Australian Bittern was seen well while Little Bitterns were heard calling. The forests along the local river were alive with birds, and we quickly added Crested Shrike-tit, Superb Parrot, White-throated Treecreeper, Buff-rumped Thornbill, Western Gerygone, Little and Noisy Friarbird and many more. At the end of the morning we visited the sewage treatment ponds where we were greeted by the amazing sight of hundreds of Plumed Whistling-ducks! A lone Blue-billed Duck was also a nice addition to the list. After a sumptuous lunch and a rest, we headed out again birding the plains north of Deniliquin. Grey-crowned Babbler, Pied & Black Honeyeater, Black-eared Cuckoo, Banded Lapwing, Brown Songlark were some of the birds we added to our list; then it was
time for a picnic dinner out on the plains while watching the sun set. After dark, the adventure of searching for Plains Wanderer by traversing the plains in 4WD vehicles equipped with spotlights. It didn’t take long before we picked up a pair of Inland Dotterels, but the main target, the very rare and range-restricted Plains Wanderer proved elusive for quite some time. Eventually we got onto a beautiful female (males breed and females are the more colourful of the pair in this species) allowing great close-up photo opportunities. Satisfied, we headed back to Deniliquin, picking up Eastern Barn Owl and Southern Boobook along the way.

Day 9. Deniliquin – Chiltern
We had a relaxed start this morning, to make up for our previous late night adverntures, and drove to the nearby Warby Ranges. This unassuming area of low hills covered in dry eucalypt woodland proved surprisingsly rich in birds, and before lunch, we had seen (and photographed) the main target of the day: Turquoise Parrot. Other good birds included Eastern Yellow Robin, Crested Shrike-tit, Satin Bowerbird and Olive-backed Oriole. We then drove to nearby Chiltern where the surrounding Box-Ironbark woodlands held for us such enticing birds as Fuscous and Yellow-tufted Honeyeater, White-bellied Cuckooshrike, Purple-crowned and Little Lorikeets and both Grey and Pied Currawong.

Day 10. Chiltern – Healesville
We spent a very successful morning in the Chiltern woodlands adding uncommon birds such as Black-chinned, Yellow-faced and White-naped Honeyeater, the elusive Speckled Warbler, more Turquoise Parrots, Diamond Firetail, Dusky Woodswallow and the rare Painted Honeyeater. After a picnic lunch we reluctantly left this birdrich area behind and drove to the lush and green hills behind Melbourne, where we stayed in the Healesville Sanctuary Lodge in the forest. The lodge’s grounds proved very productive with Rufous Fantail, King Parrot, Crimson Rosella and White-throated Treecreeper added to our list.

Day 11. Healesville – Melbourne – Werribee
We started birding this morning at Toolangi Forest, with a pleasant walk up to the lookout through the mountain forest which produced a range of nice birds including Olive Whistler, Brush and Fantail Cuckoo, Golden Whistler, while White-naped Honeyeater, White-throated and Red-browed Treecreeper fed in the upper canopy of the towering Mountain Ash trees. Shining Bronze-cuckoo called above our heads. We did a remarkably beautiful walk, lined with ancient Artic Beach trees that pre-date flowering plants. Along the rainforest walk we had fantastic views of a pair Superb Lyrebird who foraged for food on the rainforest floors. Along the walk we also had brief views of Pilotbird, as well as good views of Rose Robin and Bassian Thrush. A fantastic selection of birds. Later in the morning we headed to nearby Mount Tanglefoot, where we saw another Pilotbird, as well as Olive Whistler, Flame Robin, Crescent Honeyeater, Rose Robin, a Black-faced Monarch and both Red-browed and White-throated Treecreeper called from the towering Mountain Ash. We found a young Echidna – one of only two monotreme (egg laying mammals) found on the planet (the other being the Platypus, which can be seen on our Tasmania tour).In the afternoon we headed to a suburban park in Melbourne where we saw a family of Tawny Frogmouth and then – a jewel in the crown – two young Powerful Owls. We also visited a nearby Bell Miner colony, a bird colloquially known as the Bellbird, and drove on to Werribee for the night.

Day 12. WTP – Serendip – Anglesea
We started the day in the You Yang Ranges, where we saw Purple-crowned Lorikeet, Eastern Rosella, Long-billed and Little Corella, Red-rumped Parrot, White-winged Triller, Tree Martin, Eastern Yellow Robin and Eastern Grey Kangaroo. At Serendip Sanctuary, we found Cape Barren Goose and Magpie Goose, and a flock of Musk Lorikeet feeding in flowing Ironbark (eucalyptus). Next, to the famous Western Treatment Plant (WTP). In the ponds were large numbers of waders including Sharp-tailed, Marsh and Curlew Sandpiper, Bar-tailed Godwit, Great Knot and Red-necked Stint as well as good numbers of Red-necked Avocet and Pied Stilt. An impressive 10 species of ducks were seen at the WTP including Blue-billed, Freckled and Musk Duck, as well as thousands of Black Swans. In the reeds and grasses we saw Australasian Bushlark, Australian Reed Warbler, Little Grassbird, Golden-headed Cisticola and Australian Pipit and small flocks of White-fronted Chat. After some effort we managed both Stubble Quail and Brown Quail. while other birds seen included Whiskered and White-winged Black Tern, Australian Pelican, Red-kneed Dotterel, Australian Pied Oystercatcher, Hoary-headed Grebe, Great and Little Egret, Glossy Ibis, Royal and Yellow-billed Spoonbill, Swamp Harrier, Fairy and Tree Martin, and Yellow-rumped Thornbill.

Day 13. Anglesea – Lorne area – Melbourne
We started the day at a patch of coastal heathland where we got onto Southern Emu-wren and Striated Fieldwren, Blue-winged Parrot, Rufous Bristlebird, Tawny-crowed Honeyeater and Forest Raven. A great start to the day! Next stop was a small wetland where almost immediately several Latham’s Snipe were seen, while a large flock of Pacific (Fork-tailed) Swift circled overhead and Hooded Plovers were on the beach. In the hill forests away from the coast we saw Australian King Parrot, Crescent Honeyeater, Eastern Spinebill, Golden Whistler, Shining Bronze-Cuckoo, Brown Thornbill and Satin Bowerbird. We then finished the trip by doing a bit of seabird watching, resulting in Australasian Gannet and Black-browed Albatross, while another Rufous Bristlebird called from atop of nearby heath. A great end to the Great Southern Tour!