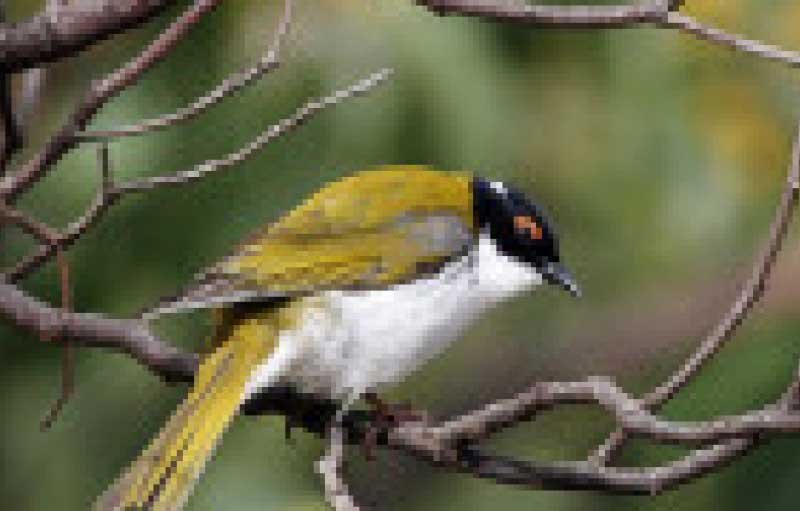 Spring 2009 was an excellent season in Southern Australia due to high winter rainfalls resulting in widespread flowering of native vegetation. As a result many resident birds had a good breeding season and many nomadic species turned up in good numbers in areas where they had been sparse over previous years. This was the fourth year the 6-day small group birding tour ‘Highlights of South Australia’ was run by Southern Birding Services. This season, the tour was run three times (August, September and October) with the same itinerary. This trip report covers the October tour. The October tour commenced on 3 October in Adelaide, South Australia, and finished there again on 8 October. Places visited included the Adelaide Hills and woodlands, River Murray, Birds Australia’s Gluepot Reserve, the Flinders Ranges, the Strzelecki outback desert and coastal areas north of Adelaide. The total number of species recorded during the tour was 191, just three short of the previous record.

The tour started in the morning of 3 October. The small group (4 people + leader) headed to the Mt Lofty ranges, to the east of Adelaide. It was cold and drizzly as we headed up Mt Lofty, southern This didn’t affect bird activity though and soon enough we observed White-throated Treecreeper in the tall, thick Eucalypt trees, as well as the colourful Adelaide Rosella. Also present was a small flock of birds containing Striated and Brown Thornbills, White-browed Scrubwren and Grey Fantail. At this and the next site we saw a good variety of Honeyeaters including Yellow-faced, Crescent, New-Holland, Whitenaped and Eastern Spinebill. Fan-tailed Cuckoo was calling across the wooded valleys and we found two Koalas resting in their usual tree. After we left the hills the weather cleared up and we visited a remnant of native mallee scrub/ heathland where two rarer species of Honeyeater, Tawny-crowned and Purple-gaped, provided good views, along with the plentiful Spiny-cheeked Honeyeater. In the dense undergrowth, the aptly named Shy Heathwren eventually showed itself as did a pair of Southern Scrubrobin. Then it was off to Australia’s largest river, the Murray, for a visit to a clifftop lookout which usually provides excellent raptor watching opportunities. Even though it was cool and windy the site did not disappoint: Whistling Kite, Black Kite, Swamp Harrier, Wedge-tailed Eagle, Little Eagle, Brown Falcon, Kestrel and even Black Falcon all put in an appearance. A highlight was a pair of Cockatiel flying by. We followed the Murray river upstream, stopping at some of its wetlands along the way and picking up species such as Yellow-billed Spoonbill, Musk Duck, Hardhead, Chestnut Teal and Yellow Rosella. At the end of the day we visited a sanctuary near Waikerie where two flocks of White-winged Choughs gave us an insight into their interesting social structure and a little later a Malleefowl appeared at close range.

A visit to Birds Australia’s Gluepot reserve. We arrived at Gluepot around sunrise and an open area n near the entrance was highly productive: Red-backed Kingfisher, White-eared Honeyeater, Gilbert’s Whistler, Chestnut Quail-thrush, Southern Scrubrobins, Crested Bellbird, the first Rainbow Bee-eaters for the season and a White-winged Triller all provided good views. Soon thereafter we found one of the main targets of the day: Black-eared Miner. A small flock of 6-8 Miners contained at least 2 Blackeared Miners as well as some hybrids x Yellow-throated Miners. We then moved onto the next target, Red-lored Whistler, which was easily found. We could now relax a bit and drive around the reserve, which resulted in other nice species such as Mallee Ringneck, Mulga Parrot, White-browed Treecreeper, Chestnut-rumped and Inland Thornbills, Varied Sittella, Chestnut-crowned and White-browed Babblers. We had our picknick lunch in a bird hide overlooking a bird water trough which provided photographic opportunities of Brown-headed, Yellow-plumed and Spiny-cheeked Honeyeater. Later in the afternoon we left the reserve and birded some more wetlands near the Murray river, where we found 3 Freckled Ducks, 4 Bluebilled Ducks as well as a nice flock of Regent Parrots. Day 3. It was an overcast and cool morning as we spent some more time checking river Murray wetlands, that had more water in them than in previous years. From within the floodplain vegetation, Rufous Songlark and Horsfield’s Bronze-cuckoo were heard singing, and both species were flushed by a Peregrine Falcon, who nests in nearby cliffs. After checking out some interesting fossil marine deposits Little Friarbirds were observed at a recent southern expansion of their range. We then headed towards the Flinders Ranges through vast open, shrubby flats of Pearl Bluebush where we quickly located a pair of Redthroat. Patches of lush green grass were alive with Orange and Crimson Chats as well as Stubble Quail. Closer to the Flinders we observed Pied Honeyeaters in flowering Acacia shrubs. Other Honeyeaters we picked up this day were White-plumed and White-fronted, bringing the total Honeyeater species count to 12. After arriving in the spectacular Flinders Ranges we saw another Inland Thornbill.

We set off before breakfast to the nearby Short-tailed Grasswren site. On the way there we had good views of an Australian Hobby. At the grasswren site after some squeeks and glimpses we eventually observed one perched on a rock and returned to have a well-earned breakfast. We then proceeded through the very scenic Flinders Ranges to pick up Grey-fronted Honeyeater and Yellow-footed Rock-wallaby, both showing well, allowing us time to observe some of the geological features of the region, including fossilised stromatolites and the fossil site of the Ediacaran fauna, which lived a little before the great explosion of multicellular life at the beginning of the Cambrian Period. It was cool and cloudy but once we’d left the mountains for the plains, the weather started to clear up. Stopping at various sites along the road we saw Elegant Parrot, Budgerigar, Pied Honeyeater, Crimson Chat, Chirruping Wedgebill, White-winged Fairy-wren and Zebra Finch. At Lyndhurst, White-backed Swallows were flying around and Little Crows allowed good comparison with Little Ravens observed on the first day in Adelaide. Participants enjoyed a spectacular sunset with a nice cold beer.

An early start this morning to explore the Strzelecki desert. Conditions weren’t ideal – it was cool, cloudy and windy, but nevertheless we turned up some great species. At our first stop it didn’t take long to find 4 endemic Chestnut-breasted Whitefaces. Thick-billed Grasswrens were running up and down dry creeklines and a pair of Rufous Fieldwren came to within a few metres of the observers. More Crimson and Orange Chats were seen as well as Pied Honyeater, Chirruping Wedgebill and Black-faced Woodswallow. We followed the Strzelecki track for some 200 km, birding along the way and we saw a pair of Cinnamon Quail-thrush, many Whitewinged Fairy-wrens and but the highlight of the day was no doubt a soaring Black-breasted Buzzard allowing excellent views. We continued following the Strzelecki Track across the stony desert, with occasional tree-lined dry watercourses, and after a few hours we reached our picknick lunch stop at Montecollina bore. This artesian bore flows non-stop creating a small oasis. It was unusual to see species such as Black-tailed Native-hen, Red-kneed Dotterel, Pink-eared Duck and Red-necked Avocet in the middle of the desert…! More White-backed Swallows flew around here and hundreds of Little Corellas were sheltering in the shrubs. On the way back to Lyndhurst we continuously scanned the track ahead for flushing birds, which could be Gibber (Desert) Chats, we saw many Australasian Pipits. After driving almost 500 km on unsealed roads, and within sight of Lyndhurst, a tyre blew at the same time as a pair of Gibber Chat flew up in front of the vehicle, allowing little more than a glimpse. After changing the tyre we were back in Lyndhurst just in time for dinner.

The last day of this tour. We departed early yet again and started heading south. It was a beautifully calm and sunny day and we soon found ourselves in Port Augusta where 6 Banded Stilts were a tick for most participants. Main focus for the morning was the Arid Lands Botanic Gardens. Here more Chirruping Wedgebill, Pied and White-fronted Honeyeater were seen and at least two pairs of Black Honeyeater brought the final Honeyeater species count to 14. Other species present in and around the Gardens were Black-eared and Pallid Cuckoo and more Crimson and Orange Chats. We then followed the coast of the Gulf St Vincent and closer to Adelaide stopped in at Port Gawler, where a search of the coastal samphire marshes resulted in two much obliging Slender-billed Thornbills (race rosinae), and more Elegant Parrots. We arrived back in Adelaide early that evening, after yet another very successful ‘Highlights’ tour!