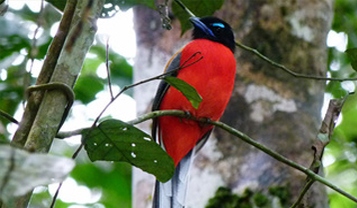 This small group photography tour was based on our long-running Peninsular Malaysia birding tour, redesigned to allow for the best photographic opportunities of Malaysia’s fantastic birdlife. With our Australian and our local guide working as a team our clients were able to obtain high quality images of iconic birds like Hornbills, Woodpeckers, Kingfishers, Broadbills, various Owls and three species of Pitta. Besides birds there were also many mammals, butterflies and flowers to capture. Well known bird rich areas were visited, including Kuala Selangor, Fraser’s Hill, Bukit Tinggi and various lowland rainforest reserves.

Day 1: After meeting everyone over dinner the night before, we headed out early to Sungai Congkak, a forest area east of Kuala Lumpur. We sat at a little pond where we were able to photograph an obliging Blue-eared Kingfisher catching fish at a very short distance. The bright orange and blue stood out beautifully against the dark forest background. Later that morning we found a Crimson-winged Woodpecker performing well for us at its nest hollow.
A Black-thighed Falconet sat up for us nicely nearby. After lunch we headed west of Kuala Lumpur to visit the Shah Alam Botanical gardens, where a very cooperative Hooded Pitta and a displaying Spectacled Spiderhunter were the highlights, providing excellent photographic opportunities. We then moved on to Bukit Tinggi for the night, an area with native forest, gardens and some open areas.

Day 2: First stop for today was a patch of native forest with the target being the rare Malaysian Peacockpheasant which did not disappoint. We were treated to one male and 2 females foraging and perching on a log regularly, posing for the photographers. A Siberian Blue Robin and White-rumped Shama popped up from time to time too. Later that day we visited a hide that attracted various Bulbuls and Babblers waiting to be photographed at close range. We also encountered our first Trogon for the day, a Scarlet-breasted Trogon, and two species of Hornbill, Oriental and Rhinocerous Hornbill, the latter in fantastic light. A very cute Black and Yellow Broadbill was happy to show off its colours and bright blue bill. They are such characters!! Other good birds encountered today were Sultan Tit, the beautiful Scaly-breasted Bulbul and an Orange-bellied Flowerpecker.

Day 3: After spending another night at Bukit Tinggi, the morning was spent on foot in an open area where we saw and photographed many good birds including 3 species of Barbet, Black Hornbill and Banded Woodpecker. We then moved on to the Krau lowland rainforests where our main target was the Rufousbacked Kingfisher. Although rainforest conditions are always challenging for bird photographers, we all came away with great photos of this beautiful and rare bird. Next was lunch, after which we moved on to the cool highlands of Fraser Hill. Along the way we had the chance to try the durian fruit, infamous for its very pungent odour. We arrived to some beautiful sunny weather, and walking around these evergreen forests saw us encountering many species of birds, with the highlights being a Red-bearded Bee-eater and the rare Green Broadbill, that with some perseverance, allowed us good photos.

Day 4: We spent the whole day visiting various spots around Fraser Hill, where our expert local guide knew exactly how to entice the local species to hop up just where we photographers wanted the bird to be. We started well with a cooperative Red-headed Trogon. The next spot saw us photographing the gorgeous Silvereared Mesia, Long-tailed Sibia, Chestnut-capped Laughing-thrush, and the highlight, the Fire-tufted Barbet. Shrew-faced Ground Squirrel would dash in and out to entertain us by stealing the fruit put out for the birds. At the next stake-out we enjoyed photographing Streaked Spiderhunter, the uncommon Golden Babbler, and the beautiful deep blue Large Niltava. At another site we targeted two uncommon and tricky species, the Lesser Short-wing and Pygmy Wren-Babbler. The latter is very fast and a challenge for photographers, but luckily it paid several visits to the log to get some worms, allowing us to capture this beautifully marked little bird. In the afternoon we were lucky enough to encounter the endemic Malayan Laughing-thrush and no less than seven Malaysian Partridges. To top off an already fantastic day, we were then treated to the rare and colourful Long-tailed Broadbill, and several Red-headed Trogons giving close-up views.

Day 5: After a quiet morning with some relaxed birding, we headed to the coastal town of Taipin. Along the way we did some birding around the city of Ipoh, where we visited the Kek Look Tong caves, where we were treated to Blue Rock-thrush, Blue Whistling-thrush and Java Sparrows. Later that day at Kuala Kurau we witnessed a pair of Spotted Wood Owl flying overhead a couple of times so we could all practice our flight shots. Continuing our drive to Taipin we encountered a staggering 16 more owls sitting on the powerlines, with both Barn Owl and more Spotted Wood Owls present.

Day 6: We visited nearby Maxwell Hill where we were treated to photographing Hooded Pitta, Rufous-collared Kingfisher, Green-backed Flycatcher, Orange-headed Thrush, Banded Kingfisher and , finally, a Chestnutcapped Forktail. We then moved on to a nearby fruiting tree which attracted a lot of birds, and it wasn’t long before we all had good shots of Asian Fairy Bluebird, Sultan Tit, Crimson-breasted Flowerpecker, and a Lesser Flameback. Later that day our local guide took us to a nesting pair of Oriental Pied Hornbills and we were able to capture the male feeding the female at the hollow. What a privilege to watch! The rest of the afternoon was spent at nearby Bukit Larut where fruiting trees attracted many birds including Pink-necked Green Pigeon, Red-crowned and Red-throated Barbet.

Day 7: This morning our main target was the Mangrove Pitta at Kedah Merbok, and we were not disappointed. It hopped up onto a log obligingly, allowing us all good photos. Other good birds also present were Forest Wagtail, White-breasted Waterhen, the rare Mangrove Blue Flycatcher and an Abbot’s Babbler. Later that day we visited a local park where our local guide expertly found a Barred Eagle-owl hiding in the foliage to delight us photographers.

Day 8: We spent the morning of this last day around the town of Kuala Selangor photographing some good species like Laced Woodpecker, Golden-bellied Gerygone; whilst the rare Black-capped Kingfisher also made a brief appearance. Later that day we staked out another beautiful target bird, the Blue-winged Pitta at Shah Alam Botanical Gardens. Again this Pitta was most obliging permitting us some photos we could all be very happy with! Ending on this high, we started making our way to the airport to say our goodbyes, all of us with many good memories and full memory cards to take home.