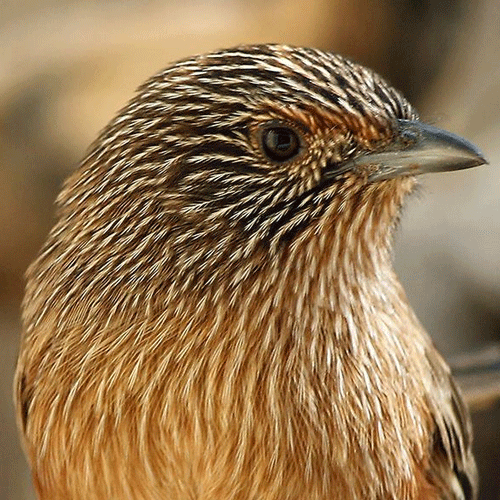 As Chris Watson recently wrote, you would be hard pressed to find a genus of birds that better evokes a sense of the Australian outback than the Grasswrens. Their plumage embodies the colours of the rocks and soil of the land they inhabit. Cryptic in their habits, Grasswrens frequent some of the most isolated and at times desolate parts of the country. Grasswrens don’t give up their secrets easily. But when seen well, perhaps emerging from a dark crevice in a spinifex-clad slope of a rocky escarpment in remote northern Australia, or giving a burst of song from an exposed branch of a smaller mallee tree during the southern spring, they reveal a subtle yet striking beauty. Like the fairy-wrens, most Grasswrens are sexually dimorphic, though in a more understated way – with females of all but the Grey Grasswren displaying more reddish flanks than the males.

Adding to the allure of Grasswrens is their elusiveness. While the first of the genus (Western Grasswren) was described in the early 1800s, most species were not encountered until the 20th century. Even into the 21st century new species are being recognised using genetic technology. Currently 13 species of Grasswren are recognised. There may yet prove to be more populations of Grasswrens in isolated fragments of habitat in the remote regions of central and northern Australia that are distinct enough to warrant further separation.

All photos on this page (c) Peter Waanders, Bellbird Tours

Black Graswrens live hidden away in the remote sandstone plateaux of the Kimberley and after their initial discovery in 1901 were not seen again until 1968. Even today these striking Grasswrens are seldom seen as only one or two locations are relatively easily accessible. 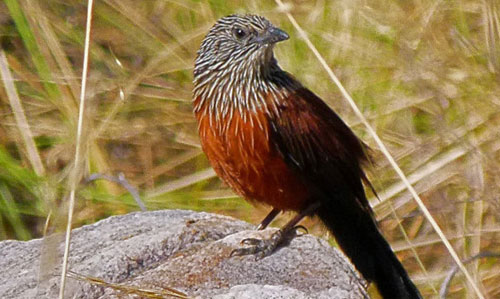 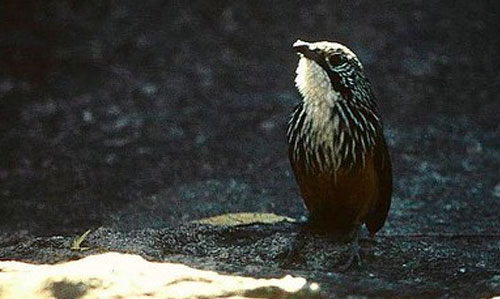 Never easy to see due to its wary nature, often hiding among rock crevices in sandstone escarpments of western Arnhem Land, the White-throated Grasswren was not seen by Europeans until 1903, then only a few times until the 1970s. Of course local indigenous people have long been familiar with this bird, having named it Yilingkirrkkirr after its distinctive, loud call. It has declined markedly in recent decades due to inappropriate fire management.

A recent taxonomic re-evaluation has shown the Striated Grasswren complex to contain at least three different species. The nominate Striated Grasswren A. striatus inhabits mallee / spinifex country in the eastern SA – western Vic region. The species has declined rapidly north of the Murray river with its major stronghold now being Murray Sunset NP in W Vic. 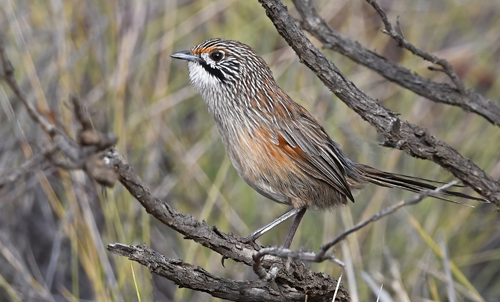 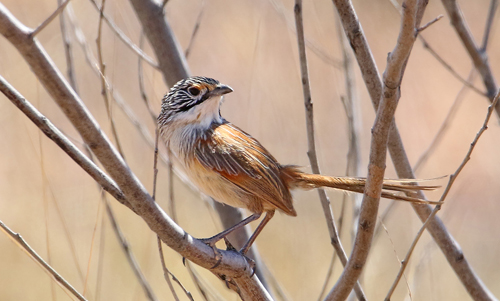 Elevated to a full species in 2020, this former subspecies of Striated Grasswren is found on the vast spinifex plains dotted with stunted Eucalyptus trees on rocky soil around Opalton in central Queensland, where its numbers appear to be holding steady.

Another recently recognised species arisen out of the former Striated Grasswren complex, Rufous Grasswren contains two broad separate populations: “Sandhill Grasswren”, found across sandplain and dune country from the western deserts to Eyre Peninsula in SA and north to near Uluru in the NT and the most obviously different “Pilbara Grasswren”, which is larger and uses its strong, thick legs to dart across rocks and boulders in the vast sea of spinifex in WA’s Pilbara region. Ongoing taxonomic research may result in further splits. 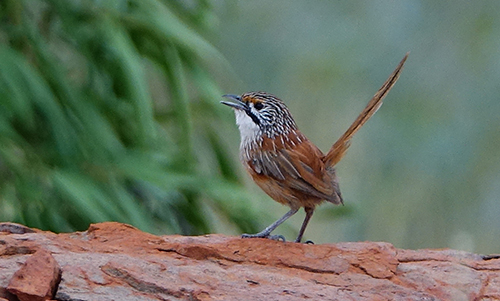 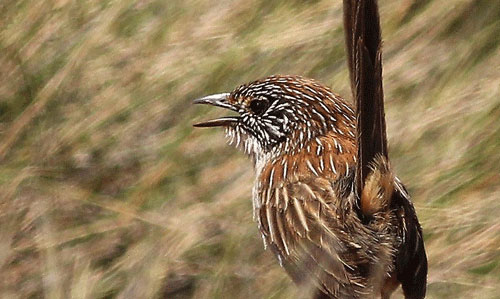 Long held to be a subspecies of Striated Grasswren, DNA work in the 1990s showed Short-tailed Grasswren to belong to a distinct evolutionary lineage and warrants its own status. They inhabit rocky, spinifex-covered terrain in South Australia’s Flinders Ranges, where they have declined markedly, yet numbers are holding steady further west in the Gawler Ranges.

There are currently seven races of Thick-billed Grasswrens recognised. This is a bird of the arid interior, dominated by low-growing saltbush, blackbush and bluebush. Its stronghold is in south-central South Australia, where it has declined recently due to habitat degradation and predation by feral cats. 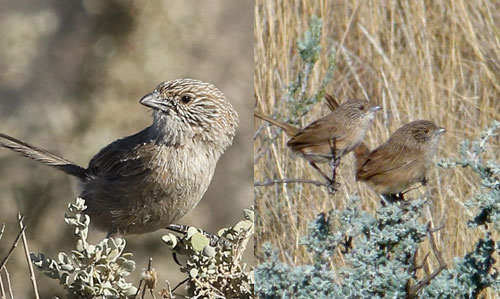 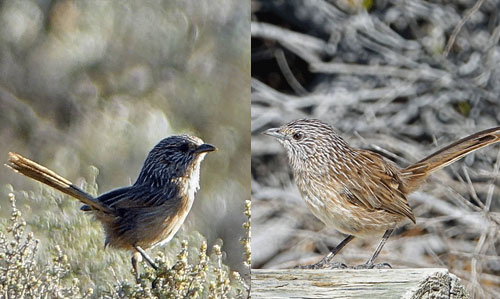 Western Grasswren was considered a subspecies of Thick-billed Grasswren until studies showed their genetic divergence, morphological differences and varied habitat choice. The Shark Bay Western Grasswren (textilis) can be seen relatively easily hopping around the carpark at the dolphin site at Monkey Mia. The other main subspecies (myall) occurs a long way east, on the South Australian Eyre Peninsula.

The Dusky Grasswren is one of the more conspicuous and easily-seen Grasswrens as it dashes about the rock-strewn slopes of the ranges of central Australia, for example near Alice Springs. There was much confusion around its taxonomic status until 1972 when the species was formally named, while an undescribed subspecies occurs further north near Tennant Creek. In 1990 the population in Queensland was recognised as a separate species (Kalkadoon Grasswren). 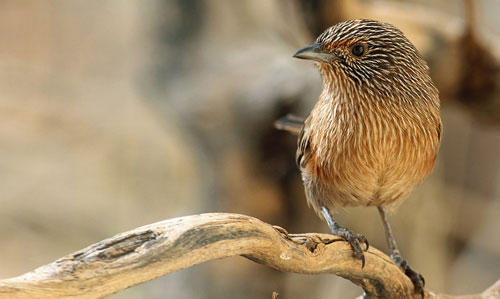 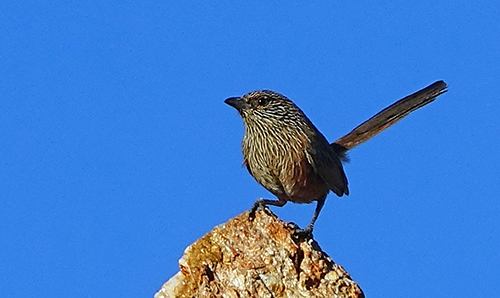 Only discovered in 1966 by Bill and Helen Hopton in the ranges near Mt Isa: Helen was nursing a sleeping infant when she spied a pair scampering across the road and almost didn’t call out to stop the car as she didn’t want to wake the baby…! For many years the Kalkadoon Grasswren was thought to be an isolated race of the Dusky Grasswren. The Kalkadoon is richer coloured with more prominent white streaking, and is named after the Kalkadoon Aboriginal region where it occurs.

First discovered in the Borroloola district of the Northern Territory in 1912, further populations were unearthed in following decades. The most recently discovered population near Mt Isa holds strong hope for the species survival as some northerly populations were lost due to too frequent fires. They inhabit spinifex-covered rocky plains, sparsely wooded with both large and small Eucalypt trees. 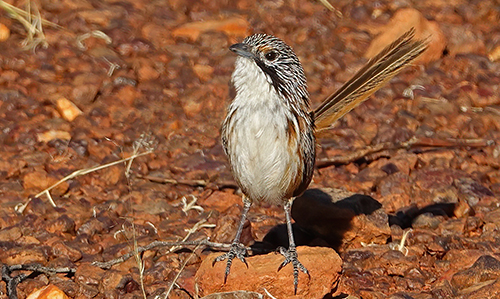 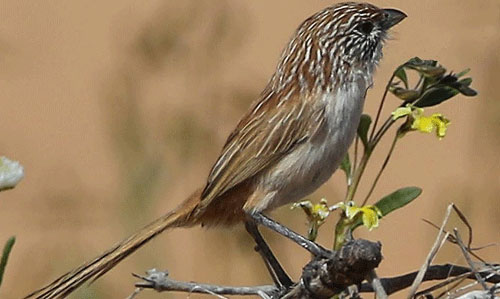 With a preferred habitat amongst Canegrass clumps on the crests of dunes in some of the harshest parts of the country, Eyrean Grasswrens were first recorded in 1874, it wasn’t until 1961 that the bird was seen again, and not until 1970 that they were regularly found. It is thriving and widespread throughout the Simpson and Strzelecki deserts. Peter Waanders of Bellbird Tours relocated them along the Strzelecki track in 2006 and made some of the birds’ locations available to the public, to the delight of many birders who have since come to spot these elusive birds.

The most distinct in both appearance and habitat preference, Grey Grasswrens favour the dense Lignum swamps of the remote Bulloo and Lake Eyre basins in the outback along the SA-Qld border. They can be almost impossible to locate even where they are known to regularly occur. 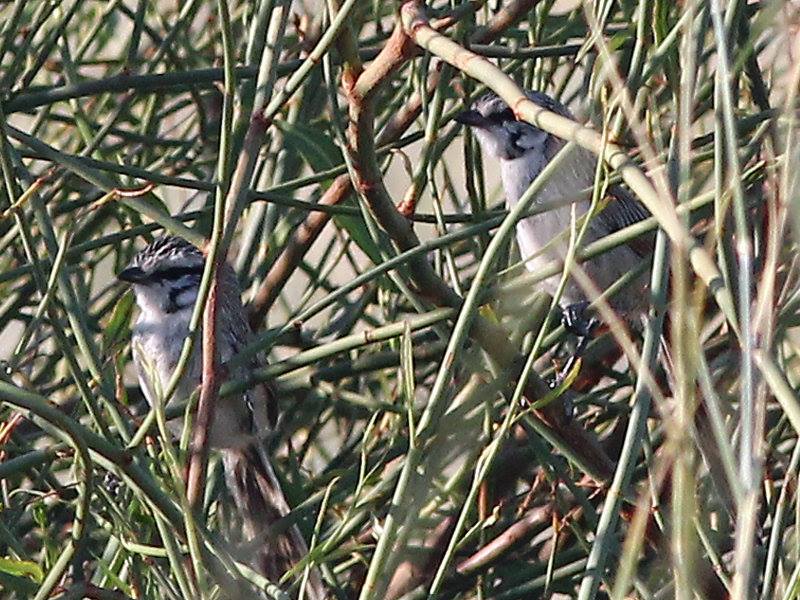