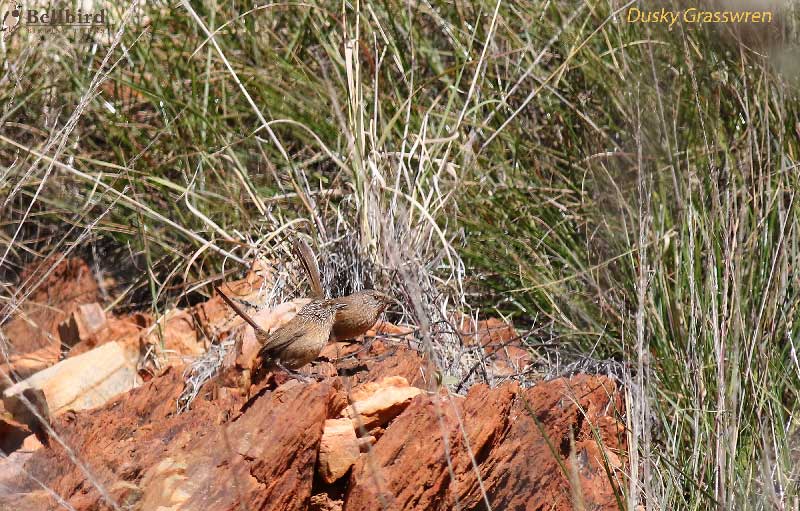 The 2016 ‘Nine Grasswren tour’ started in Adelaide (SA) and finished in Alice Springs (NT). After visiting Birdlife Australia’s Gluepot Reserve (Black-eared Miner) we explored the bluebush plains around Whyalla (Western Grasswren, Splendid (turquoise) Fairy-wren) and travelled through the scenic Flinders Ranges (Short-tailed Grasswren) up to the Birdsville track where we had both Chestnut-breasted and Banded Whiteface as well as the elusive Grey Falcon and Eyrean Grasswren. Unfortunately the Grey Grasswren site was inaccessible due to flooding but we had great views of Gibberbird and Inland Dotterel. Through the heart of outback Queensland we arrived in Mount Isa after ticking off Red-browed Pardalote, Australian Bustard and Black-breasted Buzzard while flocks of Budgerigars were wheeling through the sky. We had great views of both Carpentarian and Kalkadoon Grasswren as well as Spinifex Pigeons, Varied Lorikeets, Spinifexbird and mixed flocks of woodswallows coming in to drink. From Mt Isa we travelled west over the vast Barkly Tablelands, where Flock Bronzewings entertained us with their antics in the sky while we also found overwintering flocks of Horsfield’s Bushlarks. Finishing around Alice Springs we found Dusy Grasswren, Grey-headed Honeyeater and Spinifexbird while the highlight of the many additional birds seen by those people that took the 3-day extension were Rufous-crowned Emu-wren, Painted Finch and Bourke’s Parrot.

The weather was good throughout, with calm, sunny days and maximum temperatures in the 14-30 0C range, some frosty mornings, and no rain. A grand total of 192 bird species were recorded. The full bird list follows at the end of this document. Other sightings of interest included Freshwater Crocodile, Dingo, 3 spp of Kangaroo, Yellow-footed-, Purple-flanked and Black-footed Rock-wallaby.

You will be picked up from Adelaide Central
Railway Station (3:00pm) or 3:30pm from outside the domestic arrivals terminal
at Adelaide airport. Transfer to Waikerie for dinner and introductions.

We depart well before sunrise, for a 1-hr drive to Birds Australia’s Gluepot Reserve, contained within a 1,000,000 ha large ‘mallee’ eucalypt scrubland. We’ll soon find ourselves off the beaten track in search of our first Grasswren species: Striated Grasswren. Here we also target Red-lored Whistler, of which we have had excellent close-up views on previous trips, and the endemic and endangered Black-eared Miner. Other species we look for include Southern Scrubrobin, Shy Heathwren, Chestnut Quail-thrush, Gilbert’s Whistler, Striped, Yellow-plumed and White-eared Honeyeater, White-browed Treecreeper and with luck Malleefowl. We depart mid-afternoon and, checking the Murray river for Regent Parrots, head west, to our destination for the night at Peterborough.

We’ll depart early and head to the bluebush plains between Port Augusta and Whyalla, home to the newly-split Western Grasswren (formerly the myall race of Thick-billed). Other birds we are likely to come across are the turquoise race of Splendid Fairy-wren, Black-eared Cuckoo and Redthroat. We’ll see our first White-winged Fairy-wren, Chirruping Wedgebill and Rufous Fieldwren. Banded Stilts are often in a nearby coastal lake. We’ll then travel to Hawker, at the base of the Flinders Ranges.

We’ll head to the Flinders Ranges, an impressive range of soaring rock formations on the edge of the outback. We search the spinifex-grass covered slopes for the elusive Short-tailed Grasswren. There’ll be plenty of Red, Western Grey and Euro Kangaroos. Later in the day we proceed along creek-beds and through narrow gorges cut deeply into geological layers that date back 800 million years. Here we search for Elegant Parrot, Grey fronted Honey­eater and the rare Yellow-footed Rock-wallaby. Mt Lyndhurst, on the edge of the Strzelecki desert, is our final destination where we’ll search for Chestnut-breasted Whiteface, another SA endemic, as well as Cinnamon Quail-thrush, Chirruping Wedgebill and Rufous Fieldwren. We stand a good chance of finding Thick-billed Grasswren.

We depart around sunrise for a visit to Witchelina Station to search for any species still needed. Afterwards we continue up the Birdsville track, which traverses endless open stony plains interspersed with mostly dry watercourses. We look for Budgerigar, Red-backed Kingfisher, and have a good chance of Inland Dotterel. Near Mungerannie, the long, white sand dunes provide us with a chance of Eyrean Grasswren. An artesian bore overflow has created a nice wetland which usually holds Brolga and a raft of waterbirds, including crakes – in amidst desert-like scenery. At sunset we check for Grey Falcon!

We set off early to check for Grey Falcon again, then travel to a (usually dry) swamp some time in the morning. The constant chatter of bird calls provides a background chorus to our search for Grey Grasswren which prefers the dense lignum shrubs in the foreground. Other species we’ve encountered here are Australian Pratincole and Flock Bronzewing. Later we move on to another bore drain where the target is the very rare and localised Yellow Chat. We check a Letter-winged Kite colonial nesting site (they don’t nest each year) and have another chance of Grey Falcon and Eyrean Grasswren.

We bird around Birdsville, checking local wetlands and sand dunes for species such as Budgerigar, Brown and Rufous Songlark, Brolga, Black-tailed Native-hen, Plumed Whistling-duck and Red-browed Treecreeper. We’ll then head north, through Boulia, along the way checking for Flock Bronzewing, Letter-winged Kite (depending on preceding seasonal conditions) and a second chance of Grey Grasswren. This will mainly be a travelling day and we’ll arrive in Mt Isa some time in the evening.

A full day around Mt Isa to spend searching for two more Grasswren species: Kalkadoon and Carpentarian. Another drawcard here is Painted Finch which we’ve seen on prior visits. We’ll also spend time looking for other good species of the local area, including Australian Bustard, Spinifex Pigeon, Little Woodswallow, Spinifexbird, the ‘Cloncurry’ race of Australian Ringneck and Grey-headed Honeyeater. We’ll also visit the sewage pond, with chance of Plumed Whistling Ducks and other waterfowl and crakes.

If necessary, a few hours in the morning can be spent on the two Grasswrens. We spend the day on the road, birding our way to the scenically located Barkly Station. We are likely to come across the Golden-backed form of Black-chinned Honeyeater, Black-breasted Buzzard, Ground Cuckoo-shrike and many other good birds. At Barkly Station we’ll bird our way north with our best chance of Flock Bronzewing, as well as Aus­tral­ian Pratincole, Australian Bustard and with luck, Red-chested Buttonquail.

A travel day: across the seemingly endless plains of the Barkly Tablelands we take in the rugged beauty and watch the colour of the landscape change, to meet the Stuart Highway after which we head south. At the Devils Marbles we should see Spinifex Pigeon and flocks of Budgerigars and Cockatiels. Other birds we may encounter include Black-breasted Buzzard, Pied Honeyeater, Slaty-backed Thornbill and Crimson Chat. After a long drive we’ll roll into our comfortable accommodation in Alice Springs for our last dinner together.

We’ll end the tour on a high with our last Grasswren: the Dusky, not far from Alice Springs. There are plenty of other good birds to be had: Rufous-crowned Emu-wren, Spinifexbird, Slaty-backed and Inland Thornbill, Western Bowerbird and Painted Finch are on the menu for today. The tour finishes late in the afternoon of this day. You will be dropped off at your hotel or the airport (no flights departing before 7pm please). Thank you for joining us on this fabulous trip!