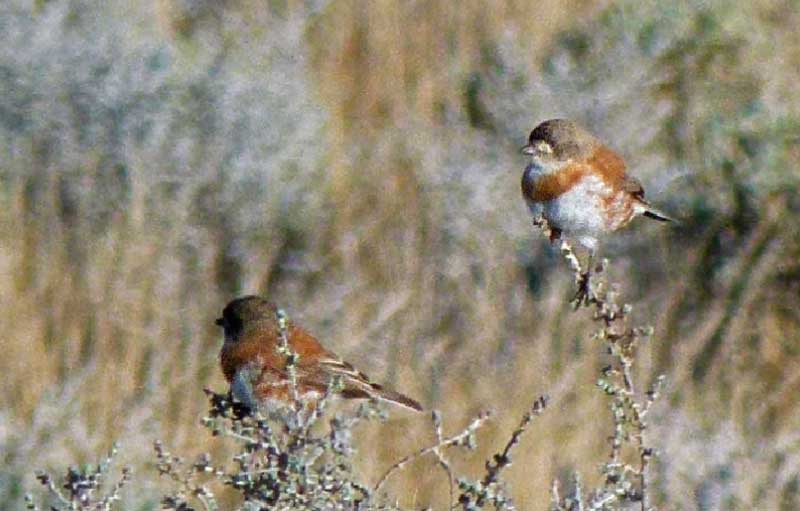 The South Australian Outback: Where Birding Legends Are Made

The June 2010 Southern Birding Services private Five Grasswren tour was, according to the participants, ‘the stuff of legends’. Day after day, rarity after rarity, in stunning scenery following excellent conditions not seen in over 20 years, it was hard to choose a single highlight of the trip –there were just too many. A brilliantly coloured male Red-lored Whistler singing its head off in the mallee eucalypt scrub. Two pairs of Letter-winged Kites on their nests in the desert. Six Chestnut-breasted Whitefaces in the mild early-morning light at some 10m distance in the scope…. A pair of Gibberbirds mating. A family group of Cinnamon Quail-thrush quietly feeding within metres of the vehicle. The calm waters of a large swamp, flooded for the first time in over a decade, where the constant chatter of ibis and spoonbill rookeries provided a background chorus to the crippling views of Grey Grasswren sitting atop lignum bushes in the foreground. Eyrean Grasswrens running along the crest of a wildflower-covered red sand dune in the late afternoon sunlight. A perfect Grey Falcon on a communications tower sitting beside its nest…. Birding doesn’t get much better than this.

In the afternoon of June 20 we drove from Adelaide to Waikerie where right on sunset a Malleefowl came out to feed. As it got dark, a Southern Boobook started calling, and we flushed a Spotted Nightjar in the headlights.

The next morning was the start of the shortest day of the year. We arrived at Birds Australia’s Gluepot Reserve shortly after sunrise and in the chilly, foggy early morning light we quickly located Chestnut Quail-thrush, Southern Scrubrobin and Gilbert’s Whistler. We then continued to a nearby area of spinifex-covered sand dunes where a beautiful male Red-lored Whistler was singing at some 10 m from the delighted observers, after a while joined by another bird. We searched various patches of spinifex for Striated Grasswrens but didn’t get more than a glimpse and a squeak. Other good species seen here include Brown Goshawk, Mulga Parrot, Brown-headed Honeyeater and Hooded Robin. At the end of the day we stumbled across another Red-lored Whistler pair and nearby a flock of Miners kept us busy trying to identify the various individuals, and eventually we had good views of two Black-eared Miners.

Started with a visit to a local Regent Parrot colony where the birds performed on cue. We arrived in the Flinders Ranges around noon to search for Short-tailed Grasswren, of which we located 4 individuals without too much trouble. Shortly afterwards while driving on a rather rocky road through creekbeds with still some water in it we watched the endangered Yellow-footed Rock-wallaby and just before dark a pair of Grey-fronted Honeyeaters put in a brilliant performance. We continued on to Lyndhurst for the night.

We were already on the Strzelecki track before the sun rose on June 23 and at our first stop in the stony desert interspersed with low hills and vegetated creek beds we found Rufous Fieldwren singing from a bush and a pair of Thick-billed Grasswrens posing perfectly on a dead branch. From the vehicle we spotted a family of Cinnamon Quail-thrush which came to within metres of the vehicle. We set off on the Strzelecki track, birding wherever there were birds, picking up flocks of Zebra Finches, Budgerigars and Cockatiels in many places. A secluded valley in between the white sand dunes kept us busy for hours as we watched two pairs of Letter-winged Kite at their nest tree. Present also were Eyrean Grasswren, Rufous Songlark, Crimson and Orange Chat, Banded Whiteface, Brown Falcon and Black-shouldered Kite. On a stony patch of gibber we encountered two pairs of Gibberbird. One of the males was singing, which I have rarely heard, and they were all highly agitated until one pair mated. At the same site were four Inland Dotterels showing well. At Montecollina Bore things were quiet with the only notable sightings being White-backed Swallows and one immature Nankeen Night-heron at the bore.

The next day,  we searched for Chestnut-breasted Whiteface and found these after about half an hour. They were singing and generally showing perfectly in the calm, sunny weather. We then set off onto the Birdsville track. Here the Coopers Creek had flooded for the first time in 20 years and we had to cross it using the ferry which had been out of action for the same amount of time. It got us across safely and we arrived at Mungerannie after flushing another Gibberbird. At the wetland a pair of Brolga was walking around with two young; we set off exploring a nearby sand dune where among a large flock of Crimson and Orange Chats we found two Banded Whitefaces. A Brown Falcon was roosting atop a dead tree as the sun went down.

We set off very early the next morning for a big day birding along the Birdsville. Just after sunrise we arrived at our first stop, a flooded swamp, where the constant chatter of ibis and spoonbill rookeries provided a background chorus to the crippling views of Grey Grasswren sitting atop lignum bushes in the foreground. A flock of Australian Pratincoles flew over as a dingo was sniffing around the car, and more Budgies and Cockatiels flew over. We were very fortunate to find a Grey Falcon sitting next to a nest on a tower, and observed this highly sought-after, yet seldom found, bird for a long time. On the way back to Mungerannie we checked another sand dune and sure enough, found another Eyrean Grasswren. At one site where there was a flowing creek with a sand dune next to it a party of migrating White-winged Trillers had found a pleasant rest stop, along with Rufous Songlarks, more chats and a Black Honeyeater.

The last morning in the desert and checking another sand dune we found a pair of Eyrean Grasswren showing very well perched atop a bush while singing. It was then time to head back to “civilization”, after a 1.5 hour wait at the ferry (it only takes one car at a time) which we didn’t mind as it allowed us to bird the inundated areas, where over 500 Gull-billed Terns were foraging. More chats, Zebra Finches, Budgies and the odd Nankeen Night-heron were found, and a curry for dinner in Pt Augusta made a welcome change from 4 nights of meat and fries.

The last day of the tour  saw us birding around a frosty Pt Augusta which yielded many Redthroats, a Black-eared Cuckoo, Chirruping Wedgebills, Little Eagle and Banded Stilt. Closer to Adelaide, we finished off the tour with close-up views of Slender-billed Thornbill. All in all, the participants agreed that it had been a highly successful tour – birding doesn’t get much better than this.