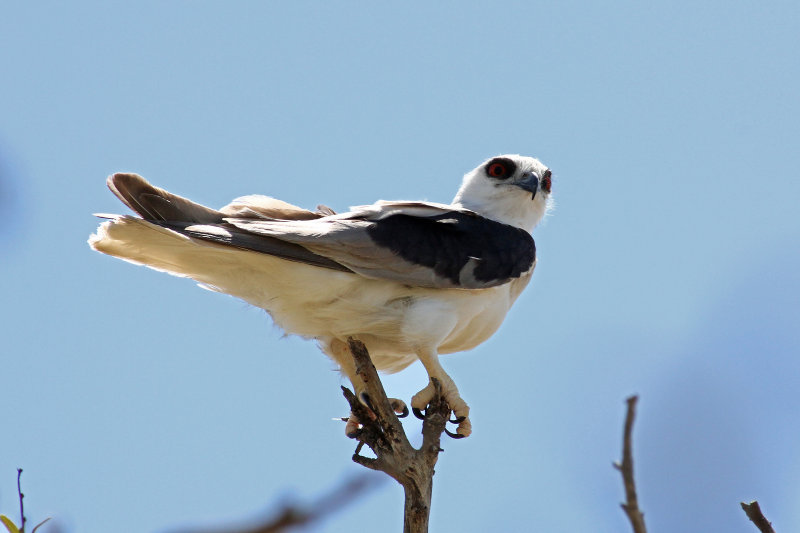 Meet and Greet dinner at the Regent Thai restaurant in North Adelaide.

After an early meet and pack at 6.30am we ventured to Port Gawler, approximately 30 minutes north of our accommodation. Here we started with our first target – Slender-billed Thornbill. We also picked up Singing Honeyeater, White-faced Heron, Swamp Harrier and White-winged Fairywren. Along the road in at a small dam we managed to find our second target the Crimson Rosella sub species Adelaide Rosella. We also saw Royal and Yellow-billed Spoonbill, Red-rumped Parrot and an assortment of the more common ducks. As we ventured further north we soon headed into raptor territory with Black and Whistling Kite, Black-shouldered Kite, Australian Kestrel, Brown Falcon and Wedge-tailed Eagle. We also encountered our first of many Emu. A chance sighting along the main road near the Flinders Ranges enabled us to get excellent views of Chirruping Wedgebill and more White-winged Fairywren including a full coloured male..

Heading out before sunrise we started birding the outback around our lodgings. Despite the dry conditions we soon had flocks of Zebra Finch and White-winged Fairywren, also Spiny-cheeked Honeyeater. As the conditions were not overly favourable to continue there we headed back to Lyndhurst and packed for the drive north. Along the way we saw numerous Wedge-tailed Eagle, Australian Kestrel, Black Kite and Brown Falcon. We also started to pick up some of our northern specialties including Black-faced Woodswallow, Cinnamon QuailThrush, Orange Chat and White-backed Swallow. At a station bore we had more Orange Chat, Little Grassbird and an Ostrich! We then proceeded on to our accommodation but not after picking up or first major target, a pair of Grey Falcon.

We spent the next full day birding the local area, starting with ground level sightings of Grey Falcon while having a picnic breakfast. Close by we also encountered a family group of 5 very obliging Banded Whiteface, Cinnamon Quail-Thrush and a quick view of the local race of Thick-billed Grasswren. We then headed for the Warburton River Campsite. The Warburton River is normally a dry creek bed, but due to the excessive rain in the north or the country in March this year, it was a fully flowing river as the water made its way 1000’s of km’s to the north of the infamous Lake Eyre. The area was alive with Budgerigar, Rufous Songlark, Little Corella, Galah, White-necked Heron, Australian Pelican, Cormorants and Zebra Finch. We returned to Mungerannie for lunch. After a short break we ventured out to the adjacent sand dunes and had great views of Red-capped Robin, Blue Bonnet, White-breasted Woodswallow, White-backed Swallow and Spiny-cheeked Honeyeater.

Heading north again early we stopped at an artesian bore for breakfast. With the success of the previous day we proceeded on to some nice Lignum Swamp for our next major target the Grey Grasswren. A small family of 3 was seen after some searching giving great views as they clambered through the top of the very dense bush. Also in the area, we had more Budgerigar, Rufous Songlark and a large nesting group of Fairy Martin. We manage to flush a hunting Grey Falcon looking for breakfast at one of the shallow waterholes. Lunch was a few km’s south of the Queensland border, on the Birdsville Track where it had been diverted into the dunes due to the flooding. Here we encountered Crimson and Orange Chat, as well Australian Pratincole. Driving through outback South West Queensland we headed further north towards the town of Bedourie. In the dry first 50km’s we flushed a small family of 3 Gibberbird who very kindly came back to the side to the road to feed less than 20 meters from us. We then entered the area that had been flooded by the flowing water over the last 4 months. We didn’t expect to see much but ended up frequently stopping as the flooding had made the region come alive with green pastures as far as we could see. Consistent flocks of Budgerigar, Australian Pratincole, and Flock Bronzewing interspersed dancing Brolga, Emu, Australian Bustard, more Chats and Diamond Dove made the drive a delight.

A pre-dawn breakfast at a nearby water hole gave us better views of Flock Bronzewing coming in to drink. While waiting we were treated to very close views of Spotted Harrier being harassed by a Black Falcon and then a Brown Falcon. Onward we travelled across the gibber plains for our next major target, Letter-winged Kite. Our first views were of 8 birds all seated on a dead bush no more than 5 meters from the road and only a meter off the ground. Nearby a roost tree held another 4. A brilliant start. Further along we found another 12+ and were afforded excellent views of them perched and flying directly overhead. Our only distraction from this amazing spectacle was a calling Red-browed Pardalote that sat 6 meters away showing off its wonderful head spots. Satisfied with exceptional views and photographs we made our way back to our lodgings. We decided to have a look at some of the dunes to the east of the town and encountered more Brolga, Flock Bronzewing and Australian Pratincole.

A big drive today with 512km’s of dirt road as we headed south again. In the first few 100 km’s we saw more Chats, brilliant views of Cinnamon Quail-Thrush and a great number of raptors including Brown Falcon, Black and Whistling Kite. We also had our first and only view of Cockatiel. Stopping for a lunch we achieved good views again of Blue Bonnet and White-breasted Woodswallow. Pressing on stopped at a small wetland with a hope for Crakes. We were not disappointed with two Australian Spotted Crake and a surprising Baillon’s Crake. We again had Little Grassbird and Australian Reed-Warbler, Brolga and two over-looking Wedge-tailed Eagle.

A leisurely drive south to the ruins of a once thriving township saw us having breakfast at the picnic site. We were treated to an aerial display of a pair of Black-breasted Buzzard. As the surrounding land was so dry we headed further south to a lake near a mine. With the water fast disappearing we did manage distant views of Black Swan, Australian Pelican, Hoary-headed Grebe, a huge number of Grey Teal along with Freckled, Musk and Blue-billed Duck. Lunch was in dry creek bed on the Parachilna Gorge road into the top of the Flinders Ranges. We then made our way to the Wilpena Pound Resort with its many Emu, Wedge-tailed Eagle, Common Wallaroo, Red Kangaroo, Western Grey-Kangaroo and a great view of Shingleback Skink. We also stopped for a photo of the famous Cazneaux Tree. A quick walk before dinner enabled us views of Fan-tailed Cuckoo, Australian Ringneck, Common Bronzewing and Inland Thornbill.

A pre-breakfast walk produced better views of Australian Ringneck, Weebill, Striated Pardalote and Brownheaded Honeyeater. After a scrumptious breakfast, we headed north through the maze of Common Wallaroo and Red Kangaroo and then west into the Brachina Gorge. On the way we had a family of Banded Lapwing including 2 Chicks. In the gorge we first came upon a pair of Little Eagle, one Dark and one Light Morph. Further along we stopped to view the gorgeous Yellow-footed Rock-Wallaby. Close by and at the end of the gorge we saw Grey-fronted Honeyeater. Returning back along the gorge we stopped thinking we had something new only to find it was a false alarm. Good thing we stopped as for the next 30 mins we had Redthroat, White-winged Fairywren, Purple-backed Fairywren and White-browed Babbler all close by. We then were treated to the Little Eagle male catching a rabbit. Lunch was back at the lodge then it was off to Arkaroo Rock for Southern Scrub-robin who gave us a run around for a while but then walked up to our feet for great views. A night walk achieved a close Australian Owlet-nightjar.

Again a great breakfast and then onward to some good habitat near Hawker. The star appearance here was a Crested Bellbird as well as Black-eared Cuckoo, Rufous Whistler and Peregrine Falcon. Then it was off to the Arid Lands Botanic Gardens at Port Augusta. Here we had brief but satisfactory views of Rufous Fieldwren in the surrounding saltbush. In the gardens themselves we had quick glimpses of our next target, Pied Honeyeater. Heading off after lunch we drove to Adelaide and then up the hill to the Belair National Park to finish off with Square-tailed Kite! We were also rewarded with great views of Eastern Rosella and our first and last Koala. Dinner at the Belair Hotel then back to Adelaide for the last night.