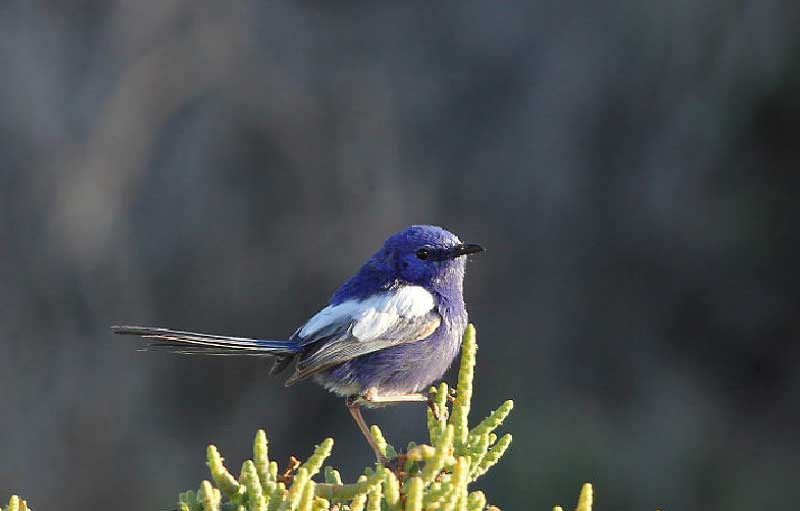 The October 2011 Southern Birding Services 6-day Five Grasswren tour consisted of 6 participants in two vehicles. As our private Grasswren tours up the Birdsville track had been highly successful in recent weeks, the itinerary took us there once again. The tour was guided by Peter Waanders, assisted by Helga Kieskamp. A total of 191 species were seen, including good views of all 5 Grasswrens.

An early departure from Adelaide. Introductions were made at our first stop on the samphire coast a little way north, where a pair of Slender-billed Thornbills showed on cue. In similar habitat further along the coast we had brilliant views of Blue-winged Parrots. Coastal saltpans at Pt Augusta held an estimated 3,000 Banded Stilts while near Hawker we enjoyed our first of many Orange Chats, White-winged Fairy-wrens, Brown and Rufous Songlarks. Travelling along the edge of the Flinders Ranges we had views of Zebra Finch, Chirruping Wedgebill and Black-faded Woodswallow. We arrived in Lyndhurst late in the afternoon and after some effort saw a pair of Thick-billed Grasswrens. Rufous Fieldwrens were more obliging while White-backed Swallows wheeled through the sky. At Marree, our base for the night, we enjoyed close-up views of Rainbow Bee-eaters. Everyone retired for an early night after a long drive.

A very early departure this morning as this was going to be our ‘big day’ on the Birdsville track. On the extensive gibber plains we had excellent and prolonged views of a Gibberbird. Last year the Coopers Creek had flooded for the first time in 20 years and was now only crossable by means of a ferry. After crossing it we started seeing Cinnamon Quail-thrush. A short coffee/tea break at Mungerannie, our base for the night, after which we drove to the site for our main target, Grey Grasswren.
Around mid-day we arrived at a flooded swamp, where it took us some time to locate them. It had become quite hot and the birds weren’t cooperating very well, so we had our picnic lunch in the shade. Fed, watered and cooled down we tried again and this time it didn’t take very long at all to obtain good views of an individual Grey Grasswren. A further 4 or 5 Gey Grasswrens were seen flying around, sometimes foraging on muddy edges, along with Black-tailed Native-hens while small flocks of Budgerigars flew over. After this success it was off to the next target: Yellow Chat. This bird, which lives in artesian bore-fed wetlands just south of the Queensland border, was quite obliging and in the end we saw at least 5 individuals. Also present at this wetland were plenty of Orange Chats, allowing good comparison of identifying differences with Yellow Chat, an Intermediate Egret, a few Glossy Ibis and various waders. On the way back to Mungerannie we saw another Gibberbird, 2 Brolgas in a wetland, Diamond Doves, more Cinnamon Quail-thrushes and the first Flock Bronzewings. We drove the last stretch in the dark and saw Barn Owl and Spotted Nightjar.

We commenced searching a nearby sand dune shortly after sunrise yielding a pair of Eyrean Grasswren which allowed good views much to the delight of the observers. On the plain a small flock of Banded Whiteface put on a good show. We slowly birded our way through the sand dunes (more Cinnamon Quail-thrushes) and gibber plains (another Gibberbird). A tree-lined dry creek bed had White-winged Trillers, Rainbow Bee-eaters and a Barn Owl was flushed out into the open, being mobbed by various birds. We went to the Warburton River, which was still flowing, where hundreds of Black-tailed Native Hens were seen foraging, as well as White-necked Herons, Great Egrets, cormorants and two Nankeen Night-herons. Also present here was a Red-browed Pardalote, Crimson Chats, Blue Bonnets and a Red-backed Kingfisher.

Towards the evening we checked out the beautiful wetland at Mungerannie. Baillon’s and Australian Spotted Crakes and a Buff-banded Rail were seen foraging around the edges while many Black Kites, a few Whistling Kites and one Little Eagle soared overhead. Playful Little Corellas rolled down the sand dune fighting but the real spectacle came closer to sunset, when hundreds of Flock Bronzewings came in to land next to the wetlands. To watch flocks of these rare birds flying directly overhead, making multiple attempts to land, eventually landing and congregating in dense groups, then flying off en-masse again was a real treat, seldom seen these days.

As we headed south one of the first birds we picked up was Black Falcon, which showed well as it slowly flew by. At the ferry we observed small flocks of Gull-billed Terns and a pair of Great Crested Grebes. Further south, a large lake contained 1000s of birds and we spent considerable time here. Working through the many waterbirds two Freckled Ducks were eventually found while on the dry edges three Inland Dotterels allowed good and prolonged views. Also present were over 100 Orange Chats, Australian Pratincoles and few Banded Lapwings. Spotted Harriers were hunting over the plains. After lunch in Marree we set of to yet another artesian bore-fed wetland where to our disappointment we found the Black-breasted Buzzard nest empty. However this was partly made up for by the sheer number of waterbirds present, including more Nankeen Night-herons, cormorants, egrets, herons, ducks, Australian Spotted Crakes and a Buff-banded Rail as well as two Brown Quail at close range. A lone Brolga was seen wandering around here. At the end of the day we went to Lyndhurst for the night.

As we set off again at sunrise we found the weather warm and windy, much to our dismay. Bird activity was virtually non-existent as the weather quickly warmed up and the wind became very strong. The main target, Chestnut-breasted Whiteface, was not found, and due to the conditions we gave up the search late in the morning. (On a private tour only 4 days later we had excellent views of 3 Chestnut-breasted Whitefaces here). But as if to make up for that, we came across a beautiful Black-breasted Buzzard, allowing us plenty opportunity to observe and photograph it. Upon arriving in the Flinders Ranges the wind had dropped a bit and a very obliging pair of Short-tailed Grasswren was seen within minutes from the vehicles! Other good species seen in the Flinders Ranges included Australian Hobby, Elegant Parrot, Diamond Dove, Grey-fronted Honeyeater, Redthroat and as always plenty of Emus. Mammals were also out in droves with four species of Macropod (Wallaroo, Western Grey and Red Kangaroo, and Yellow-footed Rock-wallaby) seen within an hour. At the end of the day we arrived in Morgan, on the banks of the Murray River, our destination for the night.

Overnight rain had made for cooler conditions and caused some fog. We set off in the dark on our way to Birds Australia’s Gluepot Reserve. As we arrived at this splendid piece of mallee eucalypt scrubland on spinifex-covered sand dunes the sun rose, driving away the fog and triggering tremendous bird activity. This year, because of excellent conditions, Scarlet-chested Parrots had been breeding at Gluepot and we staked out a nest hollow for a while. After about half an hour first a female, then a male Scarlet-chested Parrot turned up to feed the young inside. This extremely rare and beautiful parrot was high on the wisht-list of all participants and the elated birders left the scene, wanting more! They were not let down as the next species seen was Red-lored Whistler, a highly specialised bird with a very small range for which Gluepot is no doubt the best place to see them in Australia. Not far from the Red-lored Whistler we stumbled across a pair of Striated Grasswrens, running around between the spinifex clumps, and eventually one sat on top of a dead branch singing. Other birds seen at this first stop included Little Buttonquail, Chestnut Quail-thrush, Mulga Parrot, small flocks of Budgerigars and a pair of Black Honeyeaters with a young.

We then set off to search for the Black-eared Miner, threatened with extinction, and found a small flock of them at the far end of the reserve. As we explored the remainder of the reserve we noticed large flocks of White-browed and Masked Woodswallows. Other good birds included Collared Sparrowhawk, White-browed Treecreeper, Splendid Fairy-wren, Shy Heathwren, Inland Thornbill and many others. At one of the last sites we found nesting Chestnut-crowned Babblers, a pair of White-fronted Honeyeaters, Gilberts Whistler and a pair of very obliging Southern Scrubrobins that came to within metres of the observers! After a picnic lunch we travelled back to Adelaide, dare I say it, to tick Barbary Dove (shame!) before returning the happy participants back at their hotels, with a list of 191 species (new Grasswren tour record) in their pockets!