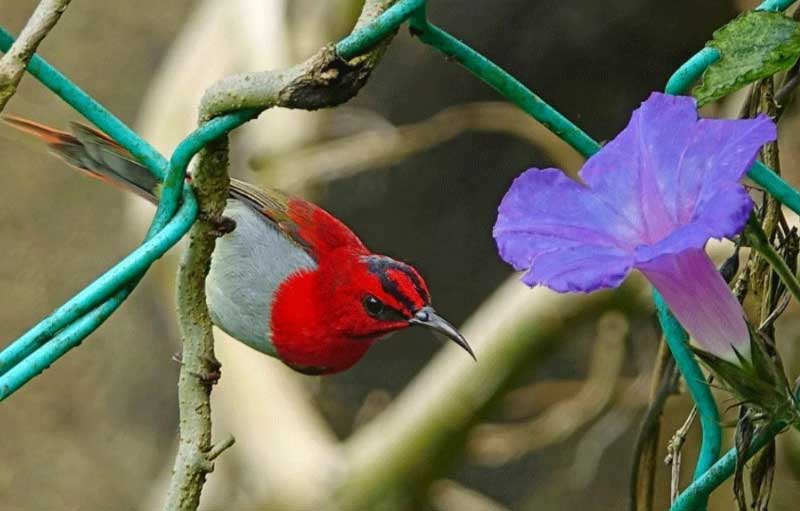 This 10-day tour took us once again through the highlights of Sabah, including the montane forests of Mt Kinabalu, across to the lowland forests at the Sepilok Rainforest Centre, up the mighty Kinabatangan River and the huge Gomantong Caves and finally to the spectacular rainforests in the world-renowned Danum Valley Conservation Area, one of the world’s top birding destinations. Total number of birds seen during the tour was a staggering 222 with another 4 heard-only.

The variety of other wildlife encountered was impressive, with the highlights being the Bornean Pygmy sub-species of the Asian Elephant, Orangutans, Proboscis Monkeys, nocturnal mammals, colourful reptiles and butterflies and no less than 12 species of squirrel! The lush rainforest, the impressive mountains, great food, comfortable roads and vehicles, and welcoming atmosphere also greatly added to the experience.

The tour commenced with a short boat ride to an island just off Kota Kinabalu where we soon had views of Mangrove Flycatcher, Mangrove Whistler and Malaysian Pied Flycatcher, before finding the main target, the elusive Tabon Scrubfowl, with some searching. After lunch we took a flight to Lahad Datu, on the eastern side of Sabah, from where we travelled in 4WD’s to the rainforests of the Danum Valley. Along the way we encountered a beautiful Asian Paradise-kingfisher, while the rare Colugo (a nocturnal mammal) was seen near the lodge.

The entire day was spent in the rainforest paradise of the Danum Valley, where we picked up a great variety of local birds including Crested Fireback, White-crowned Forktail, Rufous-bellied Hawk-eagle, the beautiful Diard’s Trogon, the elusive Black-headed Pitta, no less than 5 species of Hornbill and many more! We were excited to find a male Orangutan right above one of our cabins where it had spent the night without us realizing this! Later on a group of Red Leaf Monkeys was happy to go about their business while we were birding close by. The night spotlighting session resulted in Large Frogmouth and Buffy Fish Owl.

We spent the entire day in the Danum Valley again and we clocked up no less than 60 bird species, amongst others, a small flock of the localised Bornean Bristleheads, the cute Oriental Dwarf Kingfisher, the rare Maroon-breasted Philentoma, 3 species of Broadbill, and a Blue-eared Barbet hacking out a nest hole…. At night our experienced wildlife guide did a fantastic job finding us some stunning mammals including Leopard Cat, Bearcat, Malay Civet, Slow Loris and Sambar Deer.

The morning was spent in the Danum Valley, where we had great views of the rare Giant Pitta, Bornean Necklaced Partridge, 3 species of Wren-babbler and more. Besides the birds we also saw Bornean Gibbons and 2 species of Macaques swinging from the trees. We then travelled to the Gomantong Caves, where we were treated to an Attenborough-style spectacle: thousands of bats streaming out of their cave at dusk, while 3 Bat Hawks had a feast preying on them. The caves themselves harboured 4 species of Swiftlets. At the end of the day we reached our lodge on the mighty Kinabatangan river.

We spent this day on tributaries of the Kinabatangan river by boat. Slowly and quietly exploring the maze of waterways criss-crossing these extensive floodplain forests we were delighted by Storm’s Stork, Grey-headed Fish Eagle, Hooded Pitta, nesting Black-and-red Broadbills, 6 species of Hornbills, Proboscis Monkeys, and another Orangutan. However, the absolute highlight was to observe a herd of 14 Bornean Pygmy Elephants foraging on the river’s edge, including some young calves and one adult deciding to go for a swim!

We had one more morning to explore the river by boat to find anything we missed, and managed to see new birds such as White-crested Hornbill, Great Slaty & White-bellied Woodpeckers, a nesting Black-and-red Broadbill, and further views of Hooded Pitta. We then drove to Sepilok where late afternoon birding yielded many good birds – 3 species of Kingfisher and 4 species of Sunbird provided highlights.

An early morning birding at Sepilok resulted in cracking views of a very obliging Black-crowned Pitta, as well as the endemic Van Hasselt’s Sunbird, Lesser Green Leafbird and no less than 6 species of Woodpecker. We then travelled to Mount Kinabalu National Park where we admired a flowering Rafflesia, the world’s largest flowering plant, in remarkably cooler climes!

We spent the entire day in Mount Kinabalu NP, where we broke through 200 species for the trip. Highlights for the day included Crimson-headed and Red-breasted Partridge, Checker-throated Woodpecker, Wreathed Hornbill, Bornean Whistler, Bornean Treepie, Temminck’s Sunbird and a Mountain Blackeye that showed well for the photographers in the group. No less than 5 species of squirrel were present, in one spot the squirrels were so tame they literally came up on your lap looking for a hand out!

Another full day in Mount Kinabalu NP where Whitehead’s Trogon was an absolute star performer, assisted by the secretive Stubtail, Black-and-crimson Oriole, the endemic and localized Pale-faced Bulbul, as well as Sunda Laughing-thrush, Bornean Forktail and Bornean Green Magpie. All this in great scenery, good company and pleasant weather made for a very enjoyable day.

The last day of the tour but certainly not the least, with a fantastic morning’s birding in the Crocker ranges delivering 4 good endemics: Bornean Bulbul, Mountain Bulbul, Bornean Barbet and Mountain Barbet. The afternoon on the coast in Kota Kinabalu yielded nice views of the rare Blue-naped Parrot and Sunda Pygmy Woodpecker. The trip finished with a grand total of 222 bird species seen and a further 4 heard only, plus many exciting mammals including Asian Elephants, Bearcat, Leopard Cat, many squirrels and primates including multiple sightings of Orangutans. Join us next year!