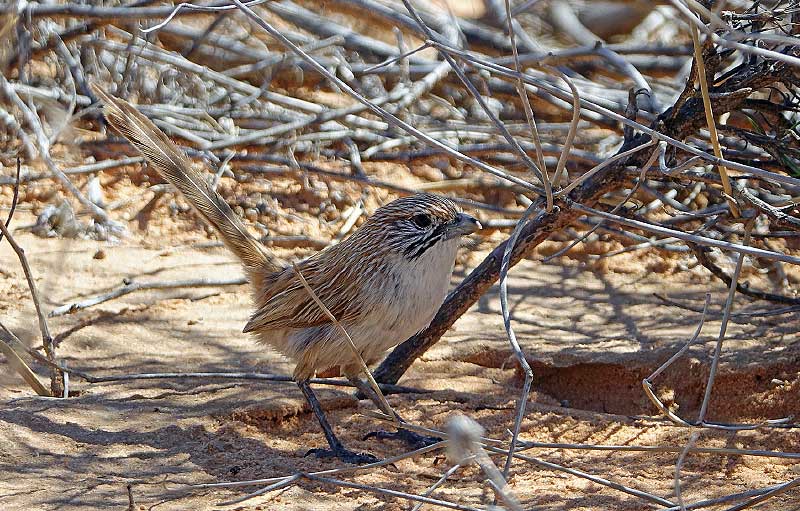 Day 1:
Day 1 of the tour started with a bang with great views of Red-lored Whistler, Black-eared Miner, Shy Heathwren, Southern Scrubrobin and a host of other mallee specialties.
Day 2:
Day 2 a fabulous morning in Hattah with Chestnut Quail-thrush and prolonged views of the two main targets, Mallee Emu-wren and Striated Grasswren. The group checked out the junction of the Murray and Darling rivers where a few regent parrots were seen, before we headed to Broken Hill for the night.
Day 3:
Day 3 Grey Grasswren was the highlight of today in the NSW-Qld border region, where we also saw Bustard, Pied Honeyeater, Little Buttonquail, Black-breasted Buzzard and impressive Wedge-tailed Eagle.
Day 4:
Day 4 Eyrean Grasswren played at our feet on day 4 of our 6 Grasswren tour! We had many sightings of this interesting species along the Strzelecki track, together with Cinnamon Quail-thrush, Rufous Fieldwren, Orange Chat, Gibberbird, Dingoes and 3 species of Kangaroo.
Day 5:
Day 5 No less than 30 Letter-winged Kite on Merty Merty Station (SA), an amazing spectacle to see these elusive, desert-dwelling semi-nocturnal raptors! We also had further sightings of Gibberbird and Cinnamon Quailthrush as well as the rare & elusive Thick-billed Grasswren.
Day 6:
Day 6 brought us Short-tailed Grasswren in the Flinders Ranges today. We also had sightings of the rare Thick-billed Grasswren, as well as Grey-fronted Honeyeater, Redthroat, Black-eared Cuckoo and Yellow-footed Rock-wallaby. An Australian Hobby chasing 2 Elegant Parrots was an unexpected highlight.
Final Morning: On the Final Day of our 6 Grasswren tour, we found Western Grasswren within seconds of arriving at the site! Following this highlight we visited the Arid Lands Botanical Gardens with Pied and Black Honeyeaters before returning to Adelaide to reflect on an amazing tour over a final dinner.