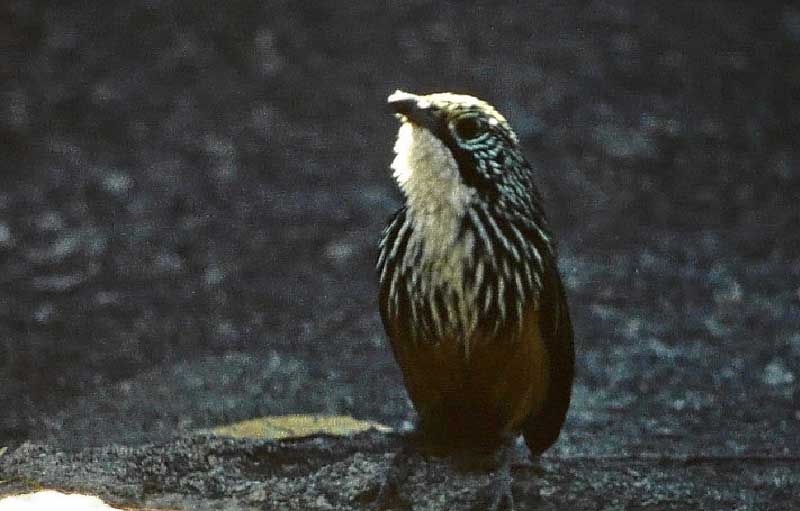 Following a succesful pre-tour extension in the Adelaide area (with daytime temperatures of 4C and sleet!) where we saw Freckled Ducks, Purple-gaped Honeyeaters, an Australian Spotted Crake and an Owlet-nightjar, we picked up the remaining participants from Adelaide and drove to Waikerie for the night.

We set off early to Birdlife Australia’s Gluepot Reserve. We spent the entire morning in the reserve and soon found ourselves observing Chestnut Quail-thrush, Southern Scrubrobin, Gilbert’s Whistler and Shy Heathwren. Not long thereafter we commenced the search for Scarlet-chested Parrot and luck was with us: within minutes we had a male flying right overhead! Of course longer and better views were desired while we started searching the spinifex for Striated Grasswren. After considerable effort we turned up a pair of them, our first Grasswren for the trip. Returning to the car we found a pair of Scarlet-chested Parrots foraging, then perched, allowing great views for everyone. High fives all around! Other birds present included White-fronted Honeyeater, Mulga Parrot, White-browed and Chestnut-crowned babblers, Restless Flycatcher, Red-capped and Hooded Robins. It was then off to search for Red-lored Whistler, of which we found a nice pair without too much effort. After this great success it was time to visit to an active Malleefowl mound. Unfortunately the birds weren’t present and we decided to press on to search for Black-eared Miners. Around some nests which I had found earlier we located a flock of some 10 birds, which largely contained Black-eared Miners as well as some hybrids. We then drove for a while through the seemingly endless expanse of mallee heading east, until we arrived at Calperum Station on the Murray River, where we had lunch. Afterwards we followed the Murray River east, and had a close encounter with an Echidna. An uneventful drive to Broken Hill was lightened up by a flock of 8 Major Mitchell’s Cockatoos and some Blue Bonnets. At the end of the day we arrived in Broken Hill, where we had dinner and spent the night.

Just north of Broken Hill we came across four Ground Cuckoo-shrikes, a highly sought-after species, allowing great and prolonged views. Around the edges of a nearby small lake, Crimson and Orange Chats were foraging while quite a number of Chirruping Wedgebills were singing in the shrubbery behind it. A walk around Packsaddle Roadhouse yielded Pied Honyeaters, White-winged Trillers and Rufous & Brown Songlarks. We had lunch in Tibooburra and with the whole afternoon ahead of us, drove out to a nearby lignum swamp in search of Grey Grasswrens. Upon arrival we found the swamp mostly under water, as it had been for the last few years. A short walk from the car to the water’s edge, and bingo – no less than 8 Grey Grasswrens sat atop lignum bushes. Cameras were clicking overtime… again, high fives all around! On the way back at sunset we stumbled across a small flock of Inland Dotterels on the road. That night we celebrated our success with a good meal in the local pub.

We watched a beautiful sunrise from a nearby granite outcrop and then spent most of today exploring Sturt National Park, with the highlights being a Red-backed Kingfisher and a pair of Bourke’s Parrots. There was a lake full of water in the middle of the park with good numbers of waterbirds, including Pink-eared Ducks. From a nearby tree hollow we flushed a Barn Owl which landed nearby, allowing good views. At the end of the day we arrived at Cameron Corner, at the point where the Australian states of Queensland, New South Wales and South Australia meet, and our destination for the night. An unexpected, but true outback-style, barbecue dinner awaited us, livened up (?) with country-and-western music.

It was a balmy morning as the sun rose over red sand dunes near Cameron Corner. Here we searched for our 3rd Grasswren species: Eyrean. After some effort we located a pair which gave great views at close range. On the way back to the cars we had good views of a pair of Cinnamon Quail-thrush, another specialty of the area. After a well-deserved late breakfast (bacon-and-egg burgers with real coffee!) we set off mid-morning towards the Strzelecki track, and quickly racked up a number of good species. More Orange Chats; Diamond Doves; Red-backed Kingfishers; flocks of Budgerigars; Blue Bonnets…It had become quite warm (35C) by the time we reached the Strzelecki track and we still had some raptors in store for the participants! First, we came across a nice adult Spotted Harrier on a fence, allowing photos at close range. Next, we checked a nest of Black-breasted Buzzard, and found a bird breeding on the nest, with another one flying around nearby. Great views and again, great photographic opportunities. Next, we went to a nearby Letter-winged Kite nest, where we also found one bird on the nest, and another one roosting in the nest tree. Fantastic! They were quite approachable and camera shutters were working overtime again. After this exhilirating raptor-filled hour it was finally time for lunch at Montecollina Bore, an artesian bore with small wetland in the middle of the Strzelecki desert, which here consists of white, beach-like sand dunes covered in sparse shrubbery. A walk around the wetland yielded Glossy Ibis, Yellow-billed Spoonbill and Black-tailed Native-hen. We then hit the road to Lyndhurst, another few hours drive away over the famous Strzelecki track. Checking a couple of known locations along the way we eventually caught up with a pair of cooperative Gibberbirds, before we arrived in Lyndhurst shortly after sunset.

We spent the morning birding around Lyndhurst yielding good species such as Rufous Fieldwren, Cinnamon Quail-thrush, Chirruping Wedgebill and White-backed Swallow. After a long search we finally caught up with a party of Thick-billed Grasswrens, our fourth species of Grasswren for the trip. Satisfied, we packed up our gear and headed south, into the Flinders Ranges, home of the Short-tailed Grasswren. A catastrophic weather event in March, followed by a record dry spell (8 months without rain), and an increase in feral cat numbers, had pushed this species to the brink of extinction in the local area. Our recent trips had failed to find any, and neither had other observers. We still spent the afternoon searching for them, hoping against hope to find one, but it was not to be. Despite this loss everyone remained in good spirits and we picked up some other good sightings, including Grey-fronted Honeyeater and Yellow-footed Rock-wallaby, before we drove to Hawker for another great dinner and well-deserved rest.

A very early start from Hawker for a drive to Whyalla Conservation Park. On the way, in Pt Augusta, we had excellent views of a large group of Banded Stilts. Upon arriving at the site for Western Grasswren near Whyalla, the weather was still nice and cool but very windy. A big rock formation in the middle of the blue-bush plain provided shelter from the wind and that’s where we found a pair of Western Grasswrens (split from Thick-billed Grasswrens earlier in 2012). After some frustrating moments we had one surrounded in a bush, allowing great views and even photo opportunities. A cup of coffee was well deserved while others chose to stroll to the top of the hill, unearthing another pair of Western Grasswrens! Next it was off to the Arid Lands Botanic Gardens, showcasing – you guessed it – arid land plant species. Flowering Eremophilas had attracted a small number of Pied and White-fronted Honeyeaters, while the resident White-plumed and Spiny-cheeked Honeyaters were ever-present, as well as Chirruping Wedgebills, White-browed Babblers and a nesting pair of Nankeen Kestrels. Lunch in the excellent restaurant here was a nice change from sandwiches in the field. We reluctantly started heading back to Adelaide, but the show wasn’t over just yet. Along the foot of the Mt Remarkable Ranges, we had great close-up views of a pair of Elegant Parrots, and a little further down the road, a pair of Cockatiels. We finished the tour in the coastal samphire marshes north of Adelaide, observing a pair of Slender-billed Thornbills. People were returned to their various destinations in Adelaide early in the evening, tired but satisfied after another great Grasswren tour!