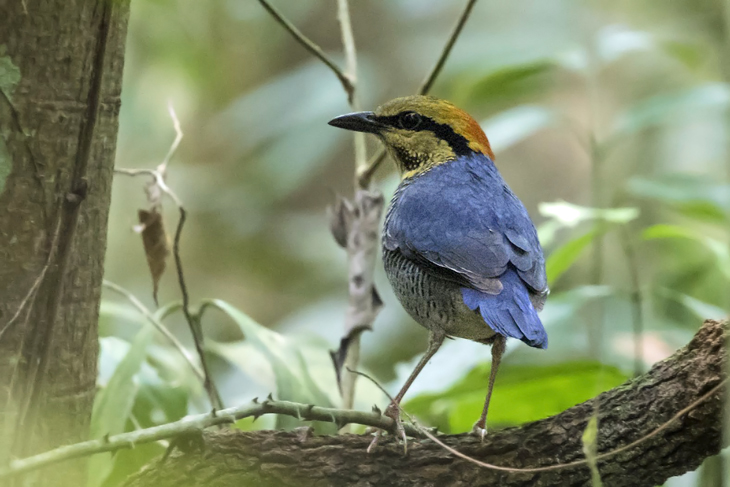 Birding Thailand always conjures up thoughts of exotic birds, warm weather and scrumptious food. This tour was no exception. We started on the beautiful coast of Phuket, spending 6 days in the southern parts of the country before flying to Bangkok. From here we explored a variety of locations, from mountain tops to lowland paddy fields. Our journey then headed south through the western and eastern areas north of Bangkok and concluded in the famous Doi Inthanon National Park. Steve Potter was the tour leader and our guests were all from Australia this time. The local guides we used were excellent in birds and mammals. The trip resulted in a record-breaking total of 443 species in less than 3 weeks, yet at a relaxed pace!

We made our way to Ao Phang-Nga National Park where we had a great start with good views of Mangrove Pitta followed by a continuous stream of birds including Ruddy and Brown-winged Kingfisher, Chestnut-headed Bee-eater, Common Flameback, Ruby-cheeked Sunbird and Scarlet-backed Flowerpecker. We then headed to the Sri Phang-Nga National Park. A quick stop at the bridge over the Takua Pa River netted us Red-wattled and River Lapwing and White-throated Kingfisher. At the National Park we picked up Bluetailed Bee-eater, Black-crested and Stripe-throated Bulbul, Puff-throated Babbler, Siberian Blue Robin and close-up views of our target Malaysian Banded-Pitta.

An early departure saw us hike through the jungle to a hide where we were treated to a displaying male Great Argus, a rare and normally elusive bird. On our hike back we saw Scarlet-rumped Trogan, Banded Kingfisher, Blyth’s Paradise Flycatcher, Maroon Woodpecker, Green Broadbill and Crested Serpent-Eagle. After lunch we found a fruiting tree that entertained us with 7 species of Bulbul including Stripe-throated. Also Orange-headed Thrush, Orange-bellied and Crimson-breasted Flowerpecker, 3 types of Barbet and Banded Woodpecker.

Back into the NP for our main target, Chestnut-naped Forktail. We also scored Spectacled and Yellow-eared Spiderhunter, Bushy-crested Hornbill, Green-billed and Chestnut-breasted Malkoha and a roosting Blyth’s Frogmouth. We then spend the afternoon travelling East.

In the morning the waterfall produced a few more new birds including Eastern Crowned Warbler, Buff-rumped Woodpecker, Square-tailed Drongo-Cuckoo and Raffle’s Malkoha. Heading west again to the Krabi region we checked into our hotel and picked up Grey-breasted Spiderhunter and a calling Collared Scops-Owl at dinner time.

Birding the jungle in the morning we saw Grey-rumped Treeswift, Puff-backed, Yellow-bellied, Grey-cheeked, Cream-vented and Hairy-backed Bulbul and Black-caped Warbler. At the local hot springs we had our first great views of Van Hasselt’s Sunbird. It was then time to head to the airport and fly to Bangkok. Here we stayed at the amazing Amari Hotel with the softest bed in town and great food.

We headed off early to the famous Pak Thale saltfield. Main target here was Spoon-billed Sandpiper which we achieved with good scope views. We picked up 49 species here including Painted Stork, Pallas’s Gull, Little Stint, Red-necked Phalarope and Chinese Egret. After lunch we took a boat trip to a sand spit getting great views of Malaysian and White-faced Plover, Collared Kingfisher and Racket-tailed Treepie. Lastly we stopped at one of the lagoons and saw Spot-billed Pelican, Black-headed Ibis, Javan Pond-Heron and 80 Painted Storks.

We started the day in the local rice paddies with Bronze-winged Jacana. Also featuring were Asian Golden, Baya and Streaked Weaver while White-throated Kingfisher, Indian Roller, Eurasian Hoopoe and a soaring Black-winged Kite also gave great views. Green and Blue-tailed Bee-eater were easy on the local power lines as were Black-browed and Oriental Reed-Warbler in the paddies. At a local hotspot we found an Indian Thick-Knee and a re-discovered bird for Thailand, the Bay-backed Shrike. A quick visit to the Phu Sai Lake enabled views of both Oriental and Small Pratincole. At the last stop, a popular hot spring, we picked up Little Cuckoo-Dove, Tickell’s Blue and Taiga Flycatcher and Hair-crested Drongo.

A full day in the Kaeng Krachan National Park. The lower elevations provided great views of some stellar birds including Gold-crested Myna, Sultan Tit, Banded, Silver-breasted and Black and Yellow Broadbill, Blue-bearded Bee-eater as well as Oriental Pied Hornbill and Crested Goshawk. We were also treated to close views of Golden Jackal and Dusky Leaf-Monkey. Elsewhere in the park we had greater Yellownape, Greater Flameback and Grey-headed Woodpecker. Later in the day we visited a hide where we encountered Large-tailed Nightjar, Golden-fronted Leafbird, Greater and Lesser Necklaced Laughingthrush. Just prior to dusk we finished with Scaly-breasted Partridge, Abbot’s Babbler and Collared Scops-Owl.

After an early breakfast we visited another hide enjoying an amazing array of birds: Grey Peacock-Pheasant, White-browed Scimitar-Babbler, Black-naped Monarch, Racket-tailed Treepie, Puffthroated Babbler and Slaty-legged Crake. We then drove to Khao Yai National Park; long the way we had great views of White-rumped Shama and Purple Sunbird.

A full day in the Khao Yai NP. An early start with two stunners: Siamese Fireback followed by Blue Pitta. Along the forest trail we saw Orange-breasted Trogon, Wreathed and Great Hornbill, more Bulbuls, Hainan Blue Flycatcher and Collared Owlet. One of the highlights was a 4-meter Reticulated Python! After Lunch we were in the forest again with Banded Broadbill, Chinese Sparrowhawk, and another Blue Pitta. Lastly near the summit we had a pair of Red-headed Trogon and a pair of Silver Pheasant. We finished the watching Himalayan Swift and Brown-backed Needletail foraging over a waterhole.

Another full day in Khao Yai, this time focusing on birds such as Mountain Imperial-Pigeon, Asian Emerald Cuckoo, a roosting Brown Hawk-owl, Laced Woodpecker, the localised Cambodian (Firebreasted) Flowerpecker and its fellow species Thick-billed, Scarlet-backed and Yellow-vented. We were also entertained by two magnificent Giant Black Squirrels. At a higher location we scored Van Hasselt’s, Olivebacked, Black-throated and Crimson Sunbird all in the same tree. Another great day birding in the forest while being serenaded by Blue-eared, Green-eared and Moustached Barbet.

Breakfast on the road while we headed to the Ta Ngoi farmlands. Here we were treated to Plain and Grey-breasted Prinia, Plain-backed Sparrow, Black-collared Starling, Thick-billed and Dusky Warbler and our main targets: Yellow-eyed Babbler and Rain Quail. In the neighbouring trees we had roosting Asian Barred and Spotted Owlet within 50 meters of each other. We drove to a nearby temple for the endemic Limestone Wren-Babbler which we had within 5 minutes of arriving! We then moved on to the Bueng Boraped area for an early night but not before a quick stop at some small waterholes for Ruddy-breasted Crake, Yellow Bittern, Grey, Yellow and Citrine Wagtail and our target, Red Avadavat.

We took an outstanding boat trip on the Bueng Boraped lake. Huge numbers of birds had us clocking up 67 species before lunch. Lesser Whistling-Duck and Garganey were plentiful with the bonus of Northern Shoveler and Norther Pintail. Large numbers or waterfowl including Grey-headed Swamphen, Eurasian Moorhen and White-breasted Waterhen while Pheasant-tailed and Bronze-winged Jacana were also present along with Yellow and Black Bittern. Other highlights were Pied Kingfisher, Eastern Marsh-Harrier, Chestnut-tailed Starling and the much sought-after Pallas’s Grasshopper-Warbler. We then drove to Mae Wong National Park, along the way stopping for Dark-sided Flycatcher, Forest Wagtail and Slaty-backed Forktail.

We started the day on the upper trails of Mae Wong National Park. Kalij Pheasant was seen first, and we saw 9 birds in total. We also were treated to Rufous-throated Partridge. Other notables were Great Barbet, Himalayan Cuckoo, Speckled Piculet, Maroon Oriole, Black and Mountain Bulbul, Sulphurbreasted Warbler, Spot-necked Babbler and Orange-bellied Leafbird. We managed time in a hide after lunch with Silver-eared Mesia, Black-throated and white-necked Laughingthrush, Striated Yuhina and Golden Babbler. On the return trip we had a spot for Rufous-browed Flycatcher. A sudden downpour had temporarily cut power, so we had an awesome dinner by candlelight!

A full day on the Doi Lang mountain. At a trail near the top we soon had Siberian Redthroat, Crested Bunting, Slaty-backed and Slaty-blue Flycatcher, Rufous-bellied Niltava, Rusty-cheeked ScimitarBabbler and a surprise late morning road crossing of a Male Mrs Hume’s Pheasant. After lunch we continued with Mountain Bamboo-Partridge, Cook’s Swift, Golden-throated Barbet, Burmese Shrike, Grey Treepie, Blackthroated and Japanese Tit, Crested Finchbill and the rarely seen Himalayan Cutia. On the way back we had great views of a pair of Mrs Hume’s Pheasant. We had cleaned up our targets and over 47 species!

An early departure to head to the lower section of the famous Doi Inthanon National Park. As we arrived we saw Rufous-winged Buzzard and Collared Falconet. We then headed for the summit and were greeted by our targets of Green-tailed Sunbird, Snowy-browed Flycather, White-browed Shortwing, Chestnut-tailed Minla, Grey-sided Thrush, Chestnut-bellied Rock-Thrush and a host of warblers. We also had Yellow-bellied Fairy-Fantail and an obliging Ashy Woodpigeon. We stopped at the jeep track half way down the hill and picked up the elusive Slaty-bellied Tesia, Yellow-cheeked Tit and White-gorgeted Flycatcher.

Our last day saw us on the lower slopes of Doi Inthanon NP at a stakeout for White-rumped Falconet. While waiting we had Eurasian Jay and Black-headed Woodpecker. The Falconet was finally located, much to the joy of all. It was then back up another mountain forest trail for Spectacled Barwing, Short-billed Minivet, Clicking Shrike-Babbler and our main target: Hume’s Treecreeper. On the way back we had views of White-capped and Slaty-backed Forktails. At lunch we were visited by a delightful White-capped River Redstart and then it was time to head out to the last stop: the Vachirathan waterfall for Plumeous Redstart. We drove back to Chiang Mai where we did the final checklist (totalling 443 species!) over a coffee before saying goodbye and dropping everyone off for their flights home.