The Scarlet-Chested Parrots of Gluepot 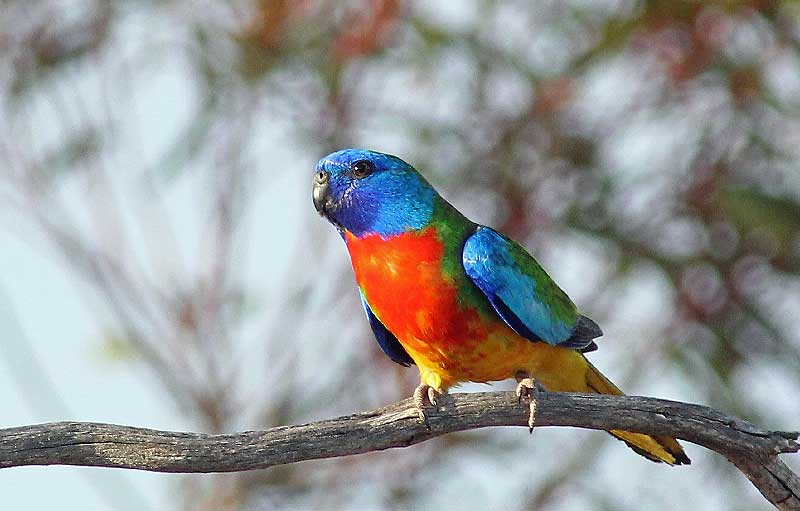 ON A COLD EARLY winter morning at Birdlife Australia’s Gluepot Reserve, a small procession of birdwatchers could be seen hiking through the fog. The first rays of the rising sun reflected off their tripods and binoculars. Their destination: a natural clearing in this 54,390 ha, arid mallee reserve. After driving for almost two hours over sandy tracks the previous day and spending the night camped in sub-zero temperatures, they had set out before sunrise to walk the almost 3 km that they hoped would lead to their goal: the Scarlet-chested Parrot.

Scarlet-chested Parrots are brilliantly coloured yet elusive birds, with a certain mystique that attracts people. Prior to Birds Australia’s purchase of Gluepot Station, 250 km north-east of Adelaide, SA, only an elite number of people were lucky enough to have sighted this beautiful parrot in the wild. They are however, a popular cage bird, with many thousands reportedly breeding in captivity. In the 1970s, the Scarlet-chested Parrots that bred on and around Gluepot Station were the target of an illegal trapping ring that was eventually broken by South Australian wildlife authorities. Combined with a number of small but intense bushfires in their breeding areas around the same time, this reduced the previously robust breeding population to low numbers and it has never really recovered. In the rest of Australia, the species is found in very low numbers throughout drier parts of southern Australia from western New South Wales to the west coast of Western Australia, but the distribution is erratic, seasonal and not continuous. There are historical claims of spectacular irruptions of hundreds of Scarlet-chested Parrots appearing in certain areas, these events usually being followed by long absences. The exact nature of these movements and patterns of abundance is not well understood. Whatever the case, the birds seem well adapted to the outback’s boom-and-bust cycles, breeding up in good seasons and crashing in bad, and wandering far and wide in between.

In the Riverland district of South Australia, it was believed that Scarlet-chested Parrots came down annually to the area around Morgan. The species attracted the interest of Adelaide-based Professor John Burton Cleland (1878—1971), pathologist and naturalist, whose scientific interests included ornithology. Professor Cleland was a prolific field collector and observer and donated nearly 1000 bird-skins to Gregory Mathews who described many in his book, The Birds of Australia (1910—1927). In the 1960s, Professor Cleland and an equally elderly friend— they must have been aged about 85—were depicted in the Adelaide Advertiser newspaper, camping near Morgan looking for Scarlet-chested Parrots. The birds did not appear!

In the 1970s, Dr Jim Fairly from Strathalbyn had slightly more luck A previous owner of Gluepot Station, Wes Mattner, is quoted recalling Dr Fairley’s escapades at Gluepot in a new book Gluepot Remembered (2006). Wes relates, ‘He was our family doctor and family friend… He used to love to get up there. He’d take one of the bikes and go away looking for birds…He found (a] rare pair of parrots…down by the Old Gluepot dam in the holding paddock, and he was ecstatic about finding them. But he never ever saw them again!’
The birdwatchers heading down the track at Gluepot in 2006 would have sympathised with Professor Cleland. The occurrence of Scarlet-chested Parrots (among 17 other nationally threatened bird species) was one of the reasons for the purchase of this magnificent piece of almost virgin mallee. The reason for their visit was that Scarlet-chested Parrots had appeared and remained for a length of time for only the second time in the nine years the property had been a Reserve.

In recent times, the first recorded sighting at Gluepot was of an immature bird in 1997. It wasn’t until the drought year of 2002 that a small flock of up to 11 birds started frequenting the area around the homestead dams. They remained for over two months, and many birdwatchers made the trip from Adelaide, Melbourne, Perth, Canberra and Queensland to view the elusive parrots. Yet the birds were very selective and seemed to appear only under certain conditions. They were evident only on the hottest days and disappeared at the slightest amount of rainfall or a cooler weather. A number of interstate travelers left without a ‘tick’ to their list. Then the birds would return again, feeding on the yellow and red berries of Ruby Saltbush, or perhaps drinking dew as has been claimed in the literature.

Prior to water infrastructure development at the station, Scarlet-chested Parrots seemed to find refuge there in drought years. Although the sea is 170 km away as the crow flies, it is theorised that summer sea breezes bring just enough moisture for dew to form on the sparse vegetation in gypsum pans, which are a few metres lower in elevation than the general topography. A study into this phenomenon was instigated in the 1970s, but never completed or written up. Interestingly, during the 2002 drought, no-one ever saw a Scarlet-chested Parrot descend to drink at the little water that was left in the drought-affected dams. After the 2002 sightings and an incidental sighting in 2003, the birds were not seen for three years. But in late summer of 2006, the birds returned to Gluepot. A flock of at least 30 was recorded on a number of occasions. As autumn progressed, up to 10 birds were regularly seen in an area just 2 km west of he 2002 sightings. The birds kept returning the same area of low, shrubby Acacia over •are soils, with the occasional mallee and Sugarwood tree surrounded by spinifex-clad dunes with a mallee overstorey.

Scarlet-chested Parrots are quiet birds that feed on the ground, mainly on the seeds of grasses and herbaceous plants. In 2006, they were observed eating the seeds of Toothed Raspwort, amongst other plants. When feeding, they are usually in isolated pairs or all groups and may easily go unnoticed unless flushed. The parrots seen during the 2006 event included males, females and immatures.

Obviously, breeding had occurred somewhere, perhaps even on the Reserve.

At Gluepot, the sun had risen and the dew was shimmering on the leaves of the low shrubs as observers started traversing the open area. After half an hour’s unsuccessful search, they thought they might have arrived too late. Was it too wet us a result of the fog? Like Professor Cleland half century ago, were they also going to miss seeing his elusive bird? As the small group approached nearby bird hide, there was a flutter of wings and a flash of red and yellow. Binoculars rose and locked onto four brilliant Scarlet-chested Parrots in rapid flight, producing a soft tinkling call in the still air, their wings showing yellow and blue. The parrots landed not far away and were soon in view again. The excitement amongst the birdwatchers was evident.

According to volunteer ranger Bernie Fay, the three-month period during which the parrots were regularly seen was one of the busiest on record, with over 400 visitors at the Reserve. While some visitors were unsuccessful in finding the birds, people were unanimous in their praise for Gluepot and its achievements.

The Scarlet-chested Parrot is among the smallest of the Neophema parrots, measuring only 20 cm. The male stands out because of the combination of bright primary colours: it has a brilliant blue face and wings, red chest, green upper parts and rich yellow underparts. The female is like a less colourful male, with a paler face and an entirely green breast. Immatures are similar to adult females, but paler. Full adult plumage is not gained until the second annual moult, 15—16 months after fledging.

Little is known about the biology and ecology of the species. The parrot tends to favour mallee eucalypt, Gimlet or Mulga woodland with an understorey of spinifex hummock. Habitat clearance has rendered much of southern South Australia and north-west Victoria unsuitable, although large fragments remain. Grazing and altered fire regimes have probably had a detrimental across other parts of their range. In addition, greater availability of water in semi-arid rangelands may have favoured more water-dependent parrots to the disadvantage of the Scarlet-chested Parrot.

One of the management strategies at Gluepot Reserve has been to close artificial watering points, thus reducing the attractiveness of the landscape to ‘invasive’ species such as Yellow-throated Miners (which interbreed with the nationally threatened Black-eared Miner). The water point closures are also expected to benefit the Scarlet-chested Parrots and other core mallee species.

The bushfires of December 2006 burned extensive areas of mallee to the south of Gluepot (including a chunk of the south-east corner of the Reserve), but it is thought that historic Scarlet-chested Parrot breeding sites have been unaffected. About three months after the fires, a small flock of up to eight of the parrots was observed over a number of weeks along the southern edge of the burnt area, again during the late summer—early autumn period.

Attempts have been made to estimate the age of the immatures among the Scarlet-chested Parrots sighted at Gluepot in 2006. The first flocks containing immatures started arriving late in February, suggesting that the majority would have fledged around December/January at the latest, although one solitary individual appeared to be several months younger. Whatever the case, it is possible that the more remote areas of Gluepot and surrounds still (or once again) contain viable populations of this rare species.

PETER WAANDERS is the founder, managing director and lead guide of Bellbird Birding Tours. He served on the Gluepot Reserve Management Board from since its inception in 1997 to 2014.